Jos Buttler on Thursday stressed that England must learn from the mistakes they committed in their loss against West Indies.

Mumbai: England wicketkeeper-batsman Jos Buttler on Thursday stressed that the team must learn from the mistakes they committed in their loss against West Indies and focus on giving their best when they take on South Africa in a must-win World Twenty20 Group 1 encounter at the Wankhede Stadium on Friday. England lost to West Indies by six wickets in their first match on Wednesday, thanks to Chris Gayle’s unbeaten 100. A loss against South Africa might make it tough for the Englishmen to qualify for the semi-finals, while their opposition will look to beat a young English side and get their first win in the World T20 under their belt. FULL CRICKET SCORECARD: England vs West Indies, Match No.15, ICC World T20 2016 at Mumbai

“We came up against someone who played a very good innings. We don’t think we were the first side and we will not be the last either. You have to be 100 percent in your abilities against someone of that capability. I think with the bat we were looking for 200, we needed someone to go on and play that sort of an innings which Gayle did,” Buttler said at a press conference. ICC T20 World Cup 2016: Marlon Samuels set up the game against England, says Phil Simmons

“So I think plenty of good things need to be done, we have to keep the last game in the past and give all our energy and effort in the coming game and focus to advance in the tournament. We need to learn from the mistakes we did against Windies and improve those,” he said. The Trevor Bayliss-coached side will once again rely on young openers Alex Hales and Jason Roy to give them a good start and with talented Joe Root, Jos Buttler, skipper Eoin Morgan and all-rounder Ben Stokes to follow, the line-up looks a competitive one.

When asked about the amount of pressure on the inexperienced side ahead of the crucial game, the 25-year-old said, “People talk a lot about the inexperience in the side but we have played a lot of cricket whether it is international cricket or not. May be the environment is different but we have guys who have played lot of cricket round, the only way you can gain experience is by playing more and more.”

Spinners Moeen Ali and Adil Rashid, who went for plenty of runs against the West Indies, alongside seamers David Willey and Reece Topley, will have to make improvements before facing hard-hitters AB de Villiers, David Miller, Jean-Paul Duminy and Proteas skipper Faf du Plessis. Speaking about the opposition, the hard-hitting batsman said, “We have played a lot of cricket against them and know very well what they are capable of. But we know very well that we have to play well in order to beat them and that’s nothing new. What will take this to do is to two to three guys from our side to stand up and deliver and make a match winning contribution.”

Buttler, who was included in the squad for Indian Premier League (IPL) franchise Mumbai Indians for the eighth edition praised the cash-rich domestic T20 tournament, hoped that more English players can take part in future. “IPL is a fantastic tournament. May be for some reasons and commitments players can’t make it to the league. We have seen from the massive crowd and playing against best players in the world, in a way always going to help players from overseas and I hope in years to come we can get more and more players to play in IPL,” he concluded. 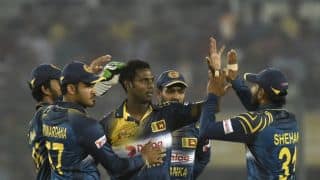