India A pacer Ishwar Pandey took four wickets, including two in successive balls, but South Africa A fought back through JP Duminy's fighting 84 and his crucial partnerships with the tail-enders in the first unofficial Test. 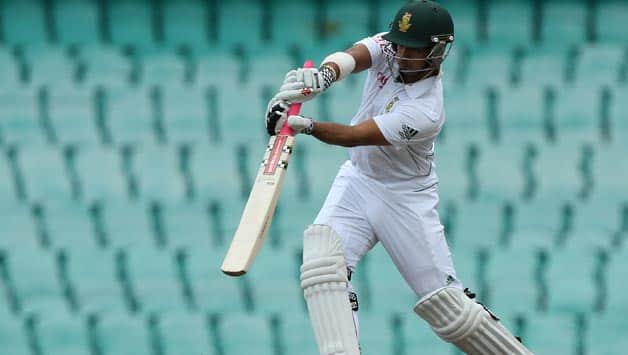 India A pacer Ishwar Pandey took four wickets, including two in successive balls, but South Africa A fought back through JP Duminy‘s fighting 84 and his crucial partnerships with the tail-enders in the first unofficial Test.

Chips were down for the home side after losing five wickets in the first two session but Duminy combined with Thami Tsolekile (47) to take South Africa A to 312 for nine at the end of the third day’s play.

Duminy and Tsolekile’s fightback in the post-tea session, in which they raised a 86-run stand for the seventh wicket, prevented India from wrapping up the first innings of the hosts today itself.

Before this, Duminy had raised another fighting 75-run stand for the sixth wicket with Justin Ontong, who scored 47 off 82 balls.

Pandey (4/40) did a fantastic job for India as he broke both the partnerships which frustrated Indian camp. Suresh Raina took two wickets, including that of Duminy, with his spin bowling.

The hosts are still 270 runs behind India A’s total of 582 for nine declared and they will have to bat through the day tomorrow to save the match.

Resuming at 20 for one, South Africa were straring down the barrel as they were reduced to 280 for six by tea but Duminy and Tsolekile presented a good fight against Indians in the last session of the day.

South Africa lost Duminy in the last over of the day when Raina had him caught behind. With his dismissal, the umpires ended the day’s play.

Duminy and Tsolekile had frustrated the Indians for close to 26 overs but Pandey broke their stand by having the latter caught by Shikhar Dhawan. In the next ball he caught Wayne Parnell in his follow through.

Before this also, Pandey had broken the big partnership between Duminy and Ontong.

Earlier, India A bowlers polished off the South Africa A middle order with regular strikes. The hosts found the going tough from the beginning as Mohammed Shami struck only in the third over of the day, dismissing opener Dean Elgar.

The pacer had Elgar trapped infront of the wicket as the hosts lost their second wicket at 22.

Pandey had Harmer caught behind and soon Rossouw joined him in the pavilion when he was trapped by Raina. Temba Bavuma, who joined Duminy at the crease, could not even open his account as he was caught by Raina off Nadeem.

Duminy, who is a regular in South Africa national side, then found an able ally in Ontong, who struck a fighting 47 off 82 balls with the help of seven shots to the fence.

However, Indians broke the 75-run stand when Pandey had Ontong caught behind just before the tea break.

Ashes 2013: Brad Haddin confident that Shane Watson will be fit for final Test