Jean-Paul Duminy's gritty knock of 97 lifted South Africa to a competitive total of 238 all-out against Sri Lanka in the fourth One-Day International at the Pallekele International Stadium on Sunday. 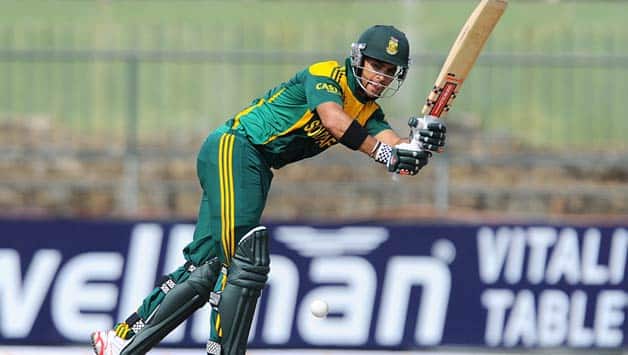 Jean-Paul Duminy‘s gritty knock of 97 lifted South Africa to a competitive total of 238 all-out against Sri Lanka in the fourth One-Day International at the Pallekele International Stadium on Sunday.

Duminy slammed two sixes and seven boundaries to score 97 off 121 balls, as his innings helped South Africa recover from a collapse which once indicated that even a score in excess of 200 would be difficult to get.

South Africa had squandered their chance to put up a huge target as they slipped from 118 for one in the 23rd over to 205 for nine in 45 overs.

Duminy’s knock and and Hashim Amla‘s quick 71-ball 77 were the bright spots as no other South African batsman managed to put up a fight against Sri Lankan bowlers.

The tourists were cruising comfortably at 118 for one when their batting mainstay Amla was dismissed by Tillakaratne Dilshan in the 23rd over of the innings — as his dismissal sparked a collapse.

But this, was after a strong 101-run stand for the second wicket between Amla and Duminy that revived South Africa from a precarious position of 17 for one after three overs, when Lasith Malinga cleaned up Quinton de Kock for eight.

Amla made a brisk 77 studded with nine boundaries, before being trapped in front of the wickets by Dilshan, while Duminy resisted as the others failed to drop the anchor.

Amla and Duminy batted cautiously to bail South Africa out of trouble early on and their century stand provided the tourists and ideal platform for a huge score. But, skipper AB de Villiers (4) returned to the pavilion soon after Amla’s fall and Sri Lanka spinners Ajantha Mendis, Dilshan and Rangana Herath got the better of a nervy South African batting line-up.

Faf du Plessis did manage to hold on scoring 23 off 44 balls, and added 46 runs from 75 balls with Duminy to help his side push towards the 200-run mark. But he fell to Herath in the 37th over with 172 on board, and his dismissal followed two more quick wickets.

While Dilshan claimed the key wickets of Amla and de Villiers in quick succession, Mendis was the wrecker-in-chief he as snaffled the dangerous David Miller (1) and Farhaan Behardien (0) in a space of three deliveries in the 38th over to dash all hopes of a big first innings total.

Malinga returned in the 42nd over and got rid of Robin Peterson for 13, and in his next had Rory Kleinveldt (8) caught by Dilshan to take his wicket count in the game to three. Malilnga had the figures of 9-0-52-3.

Towards the end, having run out of partners, Duminy took the attack to the opposition as he slammed two sixes off Mendis’s as many overs and a couple of boundaries off Malinga, but it was the Sri Lankan spinner who had the last laugh —  denying the South African batsman a deserving century, cleaning him up on the fourth ball of the 49th over to bring an end to the innings. Mendis claimed four wickets for 51 runs from his 9.1 overs.