Delhi Daredevils collapsed to a score of 132 for four at the start of the 17th over as a result.

Delhi Daredevils (DD) were in for some trouble when they lost the wickets of skipper JP Duminy and comeback man Yuvraj Singh off consecutive deliveries, albeit different bowlers, to collapse to a score of 132 for the loss of four wickets at the start of the 17th over during the 13th match of the Indian Premier League (IPL) 2015 against Sunrisers Hyderabad (SRH) at Visakhapatnam on Saturday. Live Scorecard: Sunrisers Hyderabad (SRH) vs Delhi Daredevils (DD) IPL 2015 Match 13

Duminy was bowled by compatriot Dale Steyn for a score of 54 off 41 deliveries, having shared a 78-run second-wicket partnership with Shreyas Iyer. The DD skipper hit five fours and two sixes during his stay at the crease, as Steyn ended his quota of four overs with a wicket off the last ball. Adding to the woes, Yuvraj Singh was brilliantly caught at deep-midwicket by opposition skipper David Warner, who leapt high in the air to turn a potential six into a dismissal, as Yuvraj departed after a 13-ball nine. Live Updates: Sunrisers Hyderabad (SRH) vs Delhi Daredevils (DD) IPL 2015 Match 13

Delhi Daredevils earlier won the toss and elected to bat. While skipper Duminy did not announce any changes for his playing eleven, his Sunrisers Hyderabad counterpart David Warner announced the big news of Dale Steyn finally getting to make his first appearance in the eighth edition of the IPL. Both Delhi Daredevils and Sunrisers Hyderabad have won one and lost two games in the ongoing tournament so far. IPL 2015: Complete Coverage 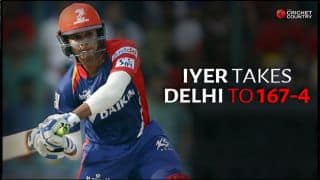