It looks like Junaid, who did not impress in his two outings against England either, has not taken the news of his omission too well.

Junaid Khan, Abid Ali and Faheem Ashraf were the three players who lost their place in Pakistan s 15-man revised squad for the ICC World Cup 2019 that was announced by Chief Selector Inzamam-ul -Haq on Monday.

Pacers Mohammad Amir and Wahab Riaz, who have a wealth of experience of playing in ICC events found their place back in the squad. Amir, who has two wickets in his last 10 ODIs and Riaz, who has not played an ODI in two years and whom coach Mickey Arthur had famously discarded “for not winning the team any matches in years”, were surprise additions.

It looks like Junaid, who did not impress in his two outings against England either, has not taken the news of his omission too well. He appears to have reservations over his ouster in favour of a duo that itself has question marks all over it. “I don’t want to say anything. Truth is bitter,” he tweeted along with a cryptic picture which he later deleted.

Amir, who is presently in London and has fully recovered from chicken pox, and Wahab is expected to join the squad in Bristol on 22 May. Both the players will be available for selection for the 24 and 26 May warm-up matches before Pakistan launches their World Cup campaign against the Windies on 31 May at Trent Bridge.

The final make-up of the squad is: 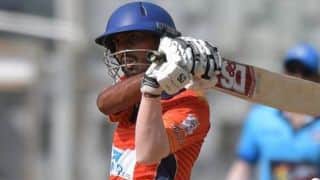 SPL vs TK, Match 14, T20 Mumbai, LIVE streaming: Teams, time in IST and where to watch on TV and online in India