Australia coach Justin Langer is looking forward to Australia ‘A’ squad tour of India to shape a settled Test lineup going into the series against Pakistan in October, which is to be held in the UAE. With Steve Smith, David Warner and Cameron Bancroft serving their ban period for the ball-tampering fiasco in South Africa, a number of places in the batting lineup are up for grabs.

Mitchell Marsh is captaining the A squad in the 2 four-day matches against India A, scheduled to be held in Vizag in September. Incumbent opener Joe Burns was left out of the A side tour but he is also hopeful of making it to the UAE tour for the Pakistan Tests.

Peter Handscomb, Travis Head, Kurtis Patterson and Matthew Renshaw will be treating the four-day matches against India A as trials for the Test team for the series against Pakistan in the UAE. Usman Khawaja would be looking to establish himself in the Test lineup as he has been in the senior team for a long time but has been through the revolving doors more than he would have wanted in the past few years.

Langer speaking to Weekend Australian said: It s unprecedented. We re going to wait until probably a week before the UAE tour to select the (Test) team.

He added: It s two-fold with India and Australia A. One, we want to see who performs under pressure and two, we want to start to get some continuity in our side where possible, but we also need to reward performance, not just talent.

Langer went on to say that he was feeling an increased sense of responsibility after assuming the role earlier this year. He feels that he would be satisfied when he not only takes Australia out of this crisis but also grooms a new crop of young players to take up leadership roles for Australia in the future.

I m getting clarity about leadership. My huge focus is organic leadership and it can t just be about the title c or vc , it s got to be about developing these young blokes. If I leave this role and there s probably six or seven guys who you could make captain tomorrow then I reckon I ve done a pretty good job,” the head coach said.

Because if we do that then not only will we be playing good cricket and I reckon the Australian public will be proud of us again, we ll have earned respect and there will be plenty of heroes out there for Australian kids and that s the way it s always been in Australian cricket, he concluded. 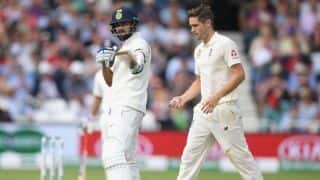