Australia dismissed both South Africa's openers early on the first day of the second and final Test at the Wanderers Stadium on Thursday before the hosts fought back through Jacques Kallis. 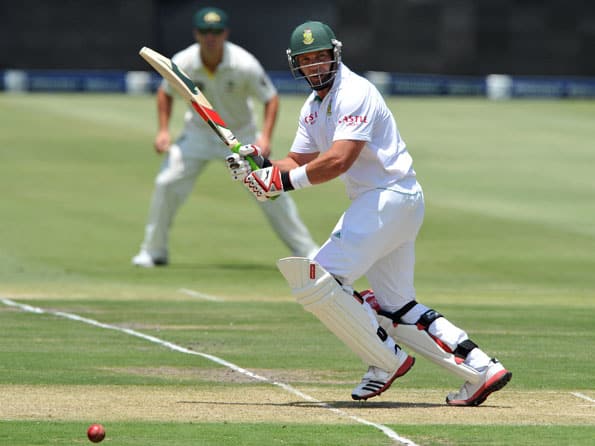 Australia dismissed both South Africa’s openers early on the first day of the second and final Test at the Wanderers Stadium on Thursday before the hosts fought back through Jacques Kallis.

South Africa were 107 for two at lunch, with Kallis on 43 not out off 33 balls. He and Hashim Amla, who batted watchfully to score 14 runs off 50 deliveries, put on an unbeaten 64 for the third wicket.

Australia suffered a blow when all-rounder Shane Watson had to leave the field with an injury and was unable to complete his fourth over. Before the setback, Watson had taken the wicket of Jacques Rudolph, caught behind for 30.

The first breakthrough was made by Mitchell Johnson, who had Graeme Smith caught at second slip for 11.

Teenage debutant Pat Cummins generated impressive pace but did not take a wicket in conceding 17 runs off eight overs.

The selection of Cummins had been widely expected but it was not known whether Johnson would have kept his place if there had not been a fitness doubt about Ryan Harris, who was reported on Wednesday as having been “stiff and sore” following the first Test.

On a hot, sunny day and on a pitch that looked ideal for batting, Cummins induced the first false strokes, with Rudolph getting off the mark in the fourth over with an inside edge for one to fine leg and Smith beaten past the inside edge in the same over.

Johnson conceded 11 runs in his third over, which included boundaries by Rudolph and Smith.

But in his next over he made a ball climb and move away slightly off a good length to have Smith caught at second slip by Michael Clarke.

Amla had scored only one when Australia sought a review of a not out decision by umpire Billy Bowden after Johnson appealed for leg before wicket. Replays showed the ball would have brushed the outside edge of the off stump, within the umpire’s discretionary zone, and Amla survived.

Kallis joined Brian Lara of the West Indies as the fourth highest run scorer in Tests when he hit the first ball he faced from Watson through the covers for four to take his total of runs to 11,953.

He took sole possession of fourth place when he scored a single in Watson’s next over.

Kallis looked in good form as he hit seven fours and added a six in the last over before lunch when he hit off-spinner Nathan Lyon over mid-wicket. (AFP)