India began their ICC Under-19 World Cup 2018 in style after beating Australia in Group B affair. In a long, long time, it was Indian bowlers that outpaced Australians; specially Kamlesh Nagarkoti and Shivam Mavi. Both touched speeds in excess of 140 kph that took Australian batsmen by surprise. Only Jack Edwards planted his best foot forward and kept Australia in hunt.

Nagarkoti along with Mavi tormented Edwards and Max Bryant early into their innings. Edwards looked jittery, while Bryant seemed took the more defensive approach. Ishan Porel twisted his ankle in his fifth over did not participate further.

Nagarkoti got the better of Bryant getting him for 29. Skipper Jason Sangha too perished soon, giving Abhishek Sharma his wicket for 14. Edwards and Jonathan Merlo came together and brought calmness for Australia.

Merlo in particular took the more aggressive approach, and managed to score 38 off 32 balls.

Mavi came into his second spell and got rid of Merlo. A flurry of wickets fell as Param Uppal ran himself out, and Austin Waugh perishing for 6. Nagarkoti beat Waugh with pace off a short-ball.

Nagarkoti got the better of Will Sutherland with a peach off a delivery; his off-stump went for a tumble.

Amidst all this, Edwards reached his second U19 half-century. With the run-rate increasing, Edwards chanced his arm against Anukul Roy and got his bails knocked over. Mavi returned for his third spell and cleaned up tail in an overs time. Baxter J Holt s resistance came too a halting end on 39. Holt’s end saw India win the game by 100 runs and move on top-spot in group.

Earlier in the day, it was Prithvi Shaw, Manjot Kalra and Shubhman Gill that smacked Australians all over the park. Shaw and Kalra missed out on centuries falling for 94 and 88 respectively. Gill scored a quick-fire 60. Edwards was the pick of the bowlers for Australia. 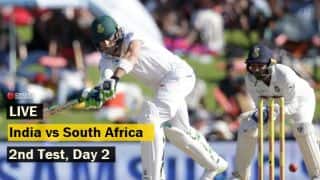