India‘s opening batsman Murali Vijay and wicket-keeper Wriddhiman Saha will miss the rest of the Sri Lanka Test series due to hamstring injuries, the team management said on Sunday. Uncapped young opener Karun Nair will replace Vijay, and Naman Ojha, who is also yet to play a Test, will come in for Saha ahead of the third and final Test in Colombo from August 28. Vijay, who missed the first Test in Galle due to a hamstring niggle, aggravated the same injury after being picked for the ongoing second Test in Colombo where he made 0 and 82.  ALSO READ: Naman Ojha, Karun Nair called in as replacements for 3rd Test against Sri Lanka

“Vijay has sustained mild re-occurrence on a pre-existing injury in his right hamstring and will need further training to recover completely,” a team statement said. Saha suffered a strain in his right hamstring while batting in India’s second innings on Sunday and did not take the field when Sri Lanka batted, leaving Lokesh Rahul to keep wickets. Saha, a useful lower-order batsman, hit half-centuries in each of the first two Tests. Nair, a 23-year-old from Karnataka, scored a match-saving 114 not out for India ‘A’ in an unofficial Test against South Africa ‘A’ last week. ALSO READ: Murali Vijay, Wriddhiman Saha ruled out of 3rd Test against Sri Lanka

Ojha, 32, played a solitary one-day international and two Twenty20 matches during India’s limited-overs tour of Zimbabwe in July. He was also called up as reserve wicket-keeper on India’s tours of England and Australia last year. India lost the first Test against Sri Lanka by 63 runs to concede the lead in the three-match series. But the tourists are in a strong position in the second Test at the P. Sara Oval where Sri Lanka, set a mammoth 413 to win, will start the final day’s play on Monday at 72-2. 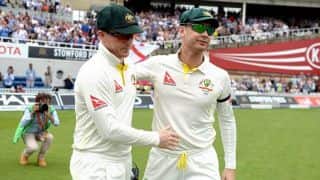