Kaushal Silva said Sri Lanka did not want to declare but to score as much as possible.

Colombo: Centurion Kaushal Silva said Tuesday Sri Lanka were determined not to let Australia off the hook after they took a commanding 288-run lead in the third and final Test in Colombo. Silva, who batted with six stitches in the webbing of his little finger after injuring himself while fielding on Monday, scored a composed 115 to dim Australia’s hopes of a consolation win. Sri Lanka, who are pushing for a rare series whitewash after winning the first two Tests, were 312 for eight in their second innings at stumps on the fourth day at the Sinhalese Sports Club. First innings centurion Dhananjaya de Silva was unbeaten on 44, with Suranga Lakmal yet to get off the mark at close of play. FULL CRICKET SCORECARD: Sri Lanka vs Australia, 3rd Test at Colombo

Silva said the hosts did not want to declare but to score as much as possible. “If we have a really good target like 350 or more then we put them out of the game, so that’s what we need to do,” he told reporters. The 30-year-old, mixing dogged defence and controlled aggression, put together a crucial 90-run partnership with the other first innings century-maker Dinesh Chandimal to thwart the Australian attack. COMPLETE UPDATES: Sri Lanka vs Australia, 3rd Test at Colombo

Silva, who regularly received treatment for his injured left finger during breaks, reached his century with a boundary off Adam Voges. “It was tough initially, because I had a split webbing also,” he said.

“But I think that in a way helped me because I knew it wasn’t easy for me to drive the ball. So I thought, let’s focus on the balls that are coming into me and leave the away-going deliveries,” said Silva. Off-spinner Nathan Lyon, who claimed four wickets, trapped Chandimal lbw for 43 in the final session to break the stand.

Silva, who survived an lbw appeal against Lyon after a successful umpire review in the first session, finally fell to the left-arm spin of Jon Holland in the 87th over. Day 4 report: Kaushal Silva slams ton as Sri Lanka’s lead surges to 288 vs Australia in 3rd Test

Australia made further inroads into the Sri Lankan line-up late in the day, but de Silva ensured that the hosts maintained their domination of the match heading into day five. Australian wicketkeeper Peter Nevill praised the Sri Lankan batsmen for their ability to play spin on turning tracks. “Our spinners have done their best to adapt, but I suppose their batsmen have played spin exceptionally well and made it very hard for a spinner to settle,” he said.

“They swept well, they used their feet well, so a lot of credit should go to their batsmen.” Lyon struck in the first hour of play to get opener Dimuth Karunaratne stumped for 22, as Nevill clipped the bails off when the batsman’s foot was raised for a split-second. Sri Lanka vs Australia 3rd Test Day 4: Highlights

Australia also benefited from a review after Holland had Kusal Perera caught off a top edge which took the pads and went into the gloves of the wicketkeeper. Perera, who scored 24, was undone by a side angle replay after a front-on view had been inconclusive. Kusal Mendis hit a quickfire 18 off 14 balls with two sixes and a four. But his counter-attack was halted when he was trapped lbw by Mitchell Starc, who has taken two wickets.

Centuries from skipper Steve Smith and Shaun Marsh had given Australia hope of a big first-innings lead on Monday, but their departure saw the visitors lose their last seven wickets for 104 runs. Veteran spinner Rangana Herath led the Sri Lankan attack, snaring six wickets, with Australia all out for 379 in response to Sri Lanka’s 355. Sri Lanka now have the chance to register their first whitewash against a major team since gaining Test status in 1981. 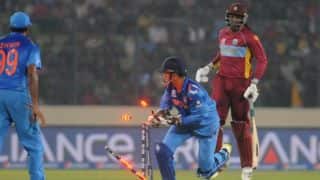