Having made significant recovery from his shoulder injury, Kedar Jadhav's active participation in successive net sessions augurs well for the Indian team.

Having made significant recovery from his shoulder injury, Kedar Jadhav‘s active participation in successive net sessions augurs well for the Indian team even though he remains a doubtful starter for the World Cup opener against South Africa.

The Indian team management will certainly feel relieved after the 33-year-old had two full-fledged net sessions since India’s arrival at this port city.

Jadhav has batted without any apparent discomfort during the sessions, which was a fair enough indication that he is nearing full fitness. He has also started bowling in the nets, something he was not doing during the IPL due to his dodgy hamstring.

While it is still not clear whether Jadhav will be considered for the opening game against South Africa on Wednesday, his fitness has been a cause of concern since he is expected to play an important role for India during the next six and half weeks.

He had hurt his left shoulder during the last IPL round robin league game for Chennai Super Kings against Kings XI Punjab and did not play the final phase of the tournament.

He was also forced to skip the two World Cup warm-up games against New Zealand and Bangladesh as he had not attained full fitness by then. After a couple of net sessions with a team bonding activity in between, the Indian team were given a day off on Sunday. 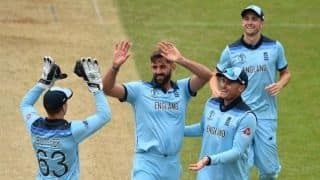