Du Plessis knows a thing or two about converting boos into chants. The South African captain hit a fine 100 not just to rescue his team, but also to win the hearts of the Australians.

Faf du Plessis has been at the centre of things in last week or so. He was first accused of ball-tampering during the second Test against Australia last week at Hobart, which his side won comfortably. After the match, his images with a mint lolly-like thing in mouth while shining the red cherry started doing the rounds, after which there were speculations that he had tampered with the ball. The ICC reprimanded him over the issue. Later, he again hit the headlines for wrong reasons when one of his security-men manhandled an Australian journalist at the airport.

In the wake of these developments, he was bound to get a negative reception by the Adelaide crowd during the third and final Test, and the same happened. He walked out to bat with the score reading 3 for 44 to loud boos. The crowd did not spare him, for according to them, the same man had screwed their chances in the previous Test. However, du Plessis knows a thing or two about converting boos into chants. The South Africa captain hit a fine 100 not just to rescue his team, but also to win the hearts of the Australians.

When the 32-year-old cricketer brought in his sixth Test hundred, the crowd gave him a reception saved for the heroes. The abuses and the booing was converted into a rousing reception. And not only in the stadium, the fans hailed his effort on social media too. Let s show you some of the top tweets praising du Plessis effort here:

Forget the Mints .. This has been an fantastic innings by @faf1307 .. He should Skipper full time .. #AUSvSA

Quality innings from @faf1307 especially given his teams position today, plus the controversy leading into the test. #AUSvSA

What an innings of character from @faf1307, after the crowd booing him and enduring a week of lollygate. #ausvsa

Brilliant from @faf1307 . Under pressure for totally unnecessary reasons over the last week. #ausvsa

Won’t be a bad thing for the proteas to bowl tonight still. Nice one @faf1307.

One hell of an innings from Faf. Bravo. Well bowled Aussie boys. This will be a bloody good period of the game to watch until stumps #AUSvSA

What an innings by @faf1307 ! Great character and skill! And declares! Oozing confidence. Time to give it all back!

That must feel sweet. Century for @faf1307 in the Adelaide test. His batting looks to be in mint condition. pic.twitter.com/IxCbgdvuFs 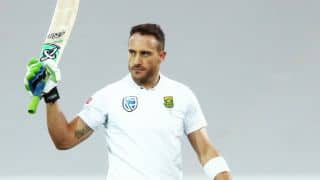