South Africa had a next to perfect start to the final session of Day Four. Their bowlers claimed 3 wickets to put them in the driver’s seat in the first Test against Sri Lanka at Port Elizabeth. The track offered absolutely nothing to the fast bowlers much to the content of the visitors. For South Africa it was Keshav Maharaj who gave them a monumental breakthrough late into the day by claiming the key wicket of Dinesh Chandimal. Sri Lanka are still 248 runs away from what could be a historic win while South Africa need to dismantle the other half of the Lankan side to go up 1-0 in the series

Chasing 488 runs Sri Lanka lost their well-set batsman Kaushal Silva for 48 to Kagiso Rabada, who got the ball to nip back into the batsman to hit just above the knee roll. Kaushal Silva was on the back foot and in the air when the ball struck him; replays clearly suggested that the ball would be hitting the top of leg-stump much to the horror of the batsman.

Kaushal Silva added 48 from 118 balls. Angelo Mathews came out in the middle in a bid to keep the Sri Lankan chase alive. Mathews in particular knocked off quick runs with South African bowlers looking a bittired. Mathews took apart Radaba in his 14th over, hammering the 21 year-old for back-to-back boundaries; 3 in total (one by Mendis).

Kusal Mendis on the other hand moved into his 30s without anyone noticing. The pair also brought up their 50-run stand in 57 balls. The pair in a rush of blood moment tried to take on Maharaj survived twice in 64th over with catches dropping short.

Mendis did not stop just their he tried to upper cut Rabada for a boundary ended up giving Quinton de Kock a simple catch for 58. Mendis fell for the round the wicket ploy and gave his wicket away ending the 75-run stand with Mathews.

Dinesh Chandimal came out in the middle looking to partner skipper Mathews. Mathews in the meanwhile continued his stout resistance in the middle. He did not fear to hit bowlers for boundaries whenever a lose opportunity arose.

The pair of Mathews and Chandimal stitched up a 32-run stand for the fourth wicket before the latter gave his wicket away cheaply (8). Chandimal trying to go over the top managed to connect the ball on edge of the bat and straight into the hands off Rabada at mid on. This was Maharaj s second wicket.He had bowled 23 overs in tandem.

Meanwhile in the same over, Mathews notched up his 26th Test half-century .Star with the bat in the first innings for Sri Lanka, Dhananjaya de Silva came out to bat following Chanidmal s wicket.

South Africa decided to take the second new-ball the moment it was made available in a look out for wickets.

Mathews (56) and de Silva (9) survived final few overs with the new ball without any more casualties for their side. 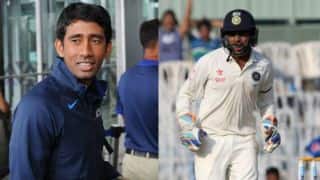 The 10,000 LBWs: From George Ulyett to Hashim Amla and other statistics