Kevin Pietersen says Hot Spot had a 'stinker' during Ashes 2013

Kevin Pietersen says Hot Spot had a 'stinker' during Ashes 2013

England batsman Kevin Pietersen declared on Tuesday that Hot Spot "had an absolute stinker" during the Ashes 2013 series, but said that players remain supportive of the technology. 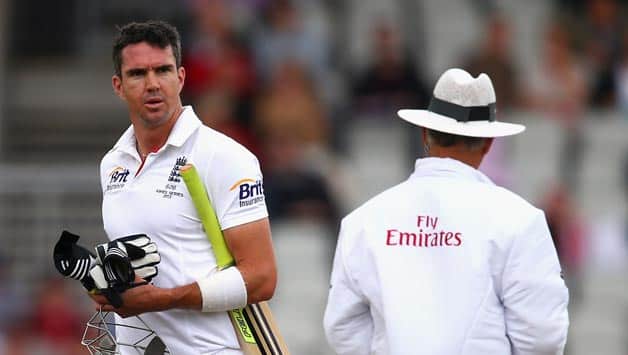 England batsman Kevin Pietersen declared on Tuesday that Hot Spot “had an absolute stinker” during the Ashes 2013 series, but said that players remain supportive of the technology.

The Decision Review System (DRS) came in for criticism during the series, which England won 3-0, with Hot Spot’s infra-red imaging falling under particular scrutiny after a number of inaccurate decisions.

Pietersen became embroiled in the debate when Australia’s Channel 9 television station claimed he used silicone tape in a bid to prevent Hot Spot from detecting when the ball had hit his bat.

The South Africa-born batsman laughed off the claims at the time but says he was bewildered by the accusation that he was a cheat.

“Hot Spot had an absolute stinker this summer for whatever reason but no-one was taping their bats with any artificial strapping or silicone,” Pietersen told talkSPORT radio station.

“I’ve had the same strapping on my bat since 1995, when I became a professional. All the pros put fibreglass tape on their bat and I copied everyone else. Every cricketer in the world does it.

“I woke up one morning in the team hotel and my Twitter had just blown up. People were calling me a cheat and some horrible expletives, and I didn’t know what was going on.

“I clearly denied it straight away on Twitter and it was done and dusted from my mind. It didn’t really bother me. I had a lot more things to worry about than the strapping on my bat.

“It was ridiculous. It was just somebody being naughty and had no bearing on anything I did, and it won’t in the future.”

Despite the Hot Spot controversies, Pietersen says that the technology retains the support of most players.

“We just don’t understand how Hot Spot didn’t work as well as it had done before,” he said. “We’ve never had these issues and I know the players are happy with Hot Spot and with DRS. There are no issues.”

Pietersen was named in England’s squad for the return Ashes series on Tuesday and says he will approach the tour in positive fashion after putting niggling knee problems behind him.

“It was tough but I’ve done some incredible rehab in the last three weeks and it feels like I have a different knee. I’m feeling so good on it,” said the 33-year-old, whose next Test appearance will be his 100th.

“For the first time since February, I am totally pain-free and I am continuing to do the right things. It was probably the best decision I made for my career not to have surgery because if I had done, I would be out till next February.”

He added: “When you get to 33, you are definitely in your second cycle of your career and it is a case of ticking all the right boxes to keep you on the field.

Ashes 1884: Wicketkeeper Alfred Lyttelton takes 4 wickets as all 11 players get to bowl