Kevin Pietersen produced just the innings Surrey wanted on Wednesday with a brisk unbeaten half-century against Glamorgan in the County Championship. South Africa-born batsman Pietersen has not played for England since controversially being axed last year following the team’s 5-0 Ashes thrashing in Australia.

But the 34-year-old has repeatedly insisted he wants to force his way back into the international set-up and has been told by incoming England and Wales Cricket Board chairman Colin Graves that he has a chance if he scores enough Championship runs.

Pietersen, who has re-signed with Surrey rather than play in the Twenty20 Indian Premier League, recently set tongues wagging with an innings of 170, albeit in a match against Oxford students that wasn’t a first-class fixture.

His return to Championship action for the first time since June 2013 was rather less dramatic, with Pietersen out for 19 on Sunday in Surrey’s first innings at Glamorgan’s Cardiff headquarters. But on Wednesday he made 53 not out off 70 balls, including four fours, before Surrey declared their second innings on 207 for four, leaving Glamorgan an unlikely 352 from a minimum of 57 overs to win this Second Division fixture.

Pietersen came in at 41 for two to join Sri Lanka great Kumar Sangakkara after the loss of first-innings double-century-maker Steven Davies. The third-wicket pair added 37 before Sangakkara was caught in the gully for 40.

Glamorgan wicketkeeper Mark Wallace claimed to have stumped Pietersen off Craig Meschede, who dismissed him in the first innings, but as ‘over’ had already been called the appeal was disallowed. 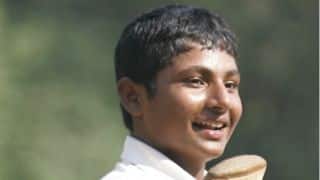