Khurram is now one of only eight batsmen in ODIs to average over 50 with a minimum of 500 runs.

Khurram Khan became the first batsman from United Arab Emirates (UAE) to score 500 runs in One-Day International (ODI) cricket. He achieved the landmark against Ireland in the ICC Cricket World Cup 2015. Khurram is something of a UAE legend, having played the most matches and scored the most runs for the team. At an age of nearly 44, Khurram is also the oldest player at the World Cup, and the third-oldest man to ever play a World Cup. Live Scorecard: Ireland vs United Arab Emirates (UAE) ICC Cricket World Cup 2015

Khurram’s average of 50.80 is also a record. He is now one of only eight batsmen in ODIs to average over 50 with a minimum of 500 runs. Ryan ten Doeschate leads the way with an average of 67. The list also includes some illustrious names like Hashim Amla, Michael Bevan, Virat Kohli, and MS Dhoni. Live Updates: Ireland vs UAE ICC Cricket World Cup 2015 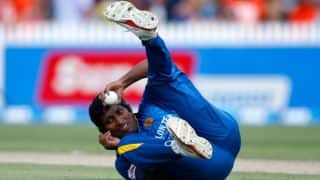