Pakistan's talented opener Khurram Manzoor Wednesday hoped his maiden hundred against South Africa will be the beginning of bigger things in the future. 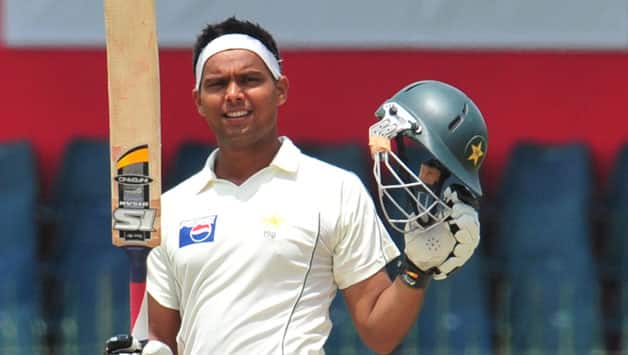 Pakistan‘s talented opener Khurram Manzoor Wednesday hoped his maiden hundred against South Africa will be the beginning of bigger things in the future.

The 27-year-old right-hander smashed 146 in Pakistan’s first innings total of 442, putting on an invaluable 135 for the opening wicket with debutant Shan Masood (75) to set a solid foundation.

Skipper Misbah-ul Haq also shone with 100 to give Pakistan a big lead of 193 over South Africa’s first innings score of 249.

By close on the third day Pakistan had removed four South African batsmen for 72, sensing an innings win on day four.

Manzoor, who was recalled to the side for the tour of Zimbabwe last month after a frustrating three-year gap, said the century will just be the beginning.

“I felt good on reaching my maiden century, wanted to get to the double but made a mistake and got out. But it is just the beginning and I will do my best to score more to further my career,” said Manzoor.
Hailed as one of the most polished openers on Pakistan’s domestic front, Manzoor made his debut against Sri Lanka in the fateful series of 2009, scoring 59 not out in the second Test.

That second Test in Lahore was postponed after terrorists attacks on the Sri Lankan team bus, eventually suspending all international cricket in Pakistan.

He also made a fighting 77 in Pakistan’s defeat against Australia at Hobart but then selectors continued to ignore him, often criticising his flawed technique. But that did not deter Manzoor.

“I didn’t get disheartened because my mentor Rashid Latif always told me to work hard and leave the rest to Almighty,” said Manzoor, refering to former captain Latif, also coach of the Port Qasim team for which Manzoor plays in Pakistan.

“I never think negatively and that’s what I have learnt from life, from my parents and from my teachers. I never lost hope and knew that one day I will get my chance,” said Manzoor.

A prolific 2012/13 season in which he scored 1065 runs plus an innings of 178 in the final of the Quaid-e-Azam trophy in February this year was enough to get a recall.

“It was a tough phase but I kept [up] the hard work,” said Manzoor who scored twin half-centuries in the second Test loss against Zimbabwe last month.

Manzoor said he looks up to experienced batsman Younis Khan as his ideal.

“I have always looked up to him to learn, to follow his footstep is my ambition. He is a great team man, always ready to help the new players,” said Manzoor, who dedicated his hundred to newly wed wife Sameen.

“I dedicate this hundred to my wife Sameen who has been praying for my success,” said Manzoor.

Pakistan, who have tried 26 different opening pairs since 2003, six in the last seven Tests, will be hoping Manzoor and Masood survive to solve their opening woes.