The Kia Super League got underway on Tuesday with Southern Vipers, Western Storm and Surrey Stars starting the season with victories.

The Kia Super League got underway on Tuesday with Southern Vipers, Western Storm and Surrey Stars starting the season with victories.

READ: Competition in Indian team has gone up – Deepti

Top-order batter Smriti and allrounder Deepti were impressed in Storm’s seven-wicket win. However, Harmanpreet and Rodrigues failed to make an impact for their respective sides.

Against Loughborough Lightning, Deepti took 1/17 from her four overs. She accounted for Loughborough captain Georgia Elwiss for a two-ball duck as they were kept to 125/6 despite opener Amy Jones’ 65 off 53. In reply, opening the innings, Mandhana set up the base for Storm’s comfortable chase, scoring 32 off 24, an innings during which she struck five fours.

It wasn’t a happy outing for Harmanpreet who managed a single, batting at No. 4, chasing 167 against Vipers. She bowled one wicketless overs for nine runs with her team falling short of the target by 34 runs.

Rodrigues made contributions in field for Yorkshire taking a catch to dismiss Surrey’s Dane van Niekerk (16) and effecting the run-out of Aylish Cranstone (9). Surrey posted 130/9 but Yorkshire were bowled out for 121 in 19.5 overs in which Rodrigues struck 4 off eight before being bowled. 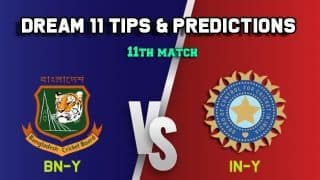 Dream11 Team Bangladesh U19 vs India U19, Match 11, U-19 Tri-series – Cricket Prediction Tips For Today’s match BN-Y vs IN-Y at Beckenham