Pollard finished off the innings with two sixes off left-arm seamer Rowan Richards.

Power-hitter Kieron Pollard put aside his wrangling with the West Indies Cricket Board (WICB) and players union, WIPA, to slam a typically scintillating unbeaten half-century as he helped propel Cape Cobras to a 14-run victory in the opening round of the Ram Slam Twenty20 League here.

The right-handed Pollard hammered 72 from just 36 balls as Cape Cobras, sent in, amassed 207 for five off their 20 overs Sunday night, reports CMC.

In reply, Titans made a game of it, reaching 193 for four, with openers Henry Davids and Dean Elgar both top-scoring with 72.

He dominated a 79-run, second wicket stand with Omphile Ramela (12) but was one of three wickets to fall for seven runs in the space of 12 balls, to leave Cape Cobras on 100 for four in the 10th over.

Pollard then rallied the innings with six fours and four sixes, putting on 65 off 41 balls for the fifth wicket with Dane Vilas who scored 19. He gathered only 14 from his first 13 balls but then exploded with two sixes in one over from left-arm spinner Graeme van Buuren before plundering four fours off the following over from fast bowler Ethy Mbhalati.

Pollard finished off the innings with two sixes off left-arm seamer Rowan Richards, in the final over which leaked 18 runs.

Elgar took three for 22 with his left-arm spin but West Indies all-rounder Darren Sammy conceded 23 runs from this two overs of medium pace.

Davids and Elgar then put on 151 for the first wicket which appeared to put Titans on course for victory. However, once they fell in the space of nine balls, the innings stuttered with Sammy lasting just two deliveries and making just one. 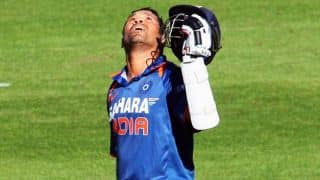 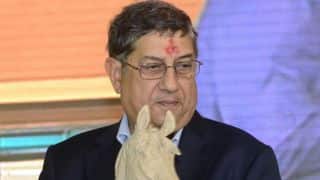