West Indies all-rounder Kieron Pollard says he is heartened by his recent performance which earned him a century and propelled Trinidad and Tobago (T and T) to within sight of title honours in the Regional Four Day tournament.

Pollard’s first innings knock of 111 powered T and T to a 145-run trouncing of Jamaica within three days and signalled his return from a career threatening knee injury, reports CMC.

As a result, Trinidad and Tobago now lead the standings with 72 points, seven points clear of Wind Islands who have played all six of their matches.

“I feel good to get triple figures again. It’s always great when you actually bat for long periods,” said Pollard.

“I’ve been practicing in the nets and I’ve been doing a lot of batting, while I was rehabilitating so, for me, it’s just hard work paying off.”

Pollard has been recuperating from a lengthy knee injury he sustained during a charity football match.

“The knee is fine. I got through this game again. I’ve been doing training on mornings. I’m still working on it. These injuries take almost a year to actually heal properly so I still have a lot of work to do but, coming back before time, it was a great achievement for me,” he said.

“Football has cost me six months, a major career-threatening injury so some things you just have to put on the back-burner, and you learn from that. At the end of the day, I still watch football. I’m a Manchester United fan so that will be enough.”

The hard-hitting batsman and medium pacer was set to leave for the United Arab Emirates (UAE) on Wednesday night for the 2014 Indian Premier League (IPL)starting April 16th. 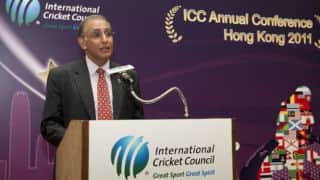