New Delhi: Expressing his displeasure over the Pakistan Cricket Board‘s (PCB) proposal to resume bilateral cricket series between the two Asian neighbours, Bharatiya Janata Party (MP) and former cricketer Kirti Azad on Sunday said New Delhi shall not have any relations with Islamabad till the perpetrators of the 26/11 Mumbai terror attacks are brought to book.

“What has changed after 26/11? When the Government of India had taken a stance that till the perpetrators of the crime of 26/11 that happened in Mumbai are brought to book, we shall not have any relations as far as cricket is concerned,” Azad told ANI here.

“So, I just want to know what has changed except for Lakhvi being given bail who was also indicted in the 26/11 attacks. So, why should we play with Pakistan?” he asked.

Addressing the media along with Dalmiya, Khan said the series between Indian and Pakistan are more important than any other series in the world.

“So, I have come here first to congratulate my old friend to pick up the thread of cooperation with Board of Control for Cricket in India. And we have also talked about many issues which we can move forward on. As you know, we have a Memorandum of Understanding to play five series in eight years and the first of these is scheduled to take place in December this year,” said Khan.

“And I have come here to state that this is an important beginning, a re-beginning, a revival of Pakistan-India cricket which is so important to the cricketing community of India and Pakistan and of course to the rest of the world,” he added.

The last time the two nations played was in 2012-13 when Pakistan visited India for a three-match One Day International (ODI) and two-match Twenty20 series. 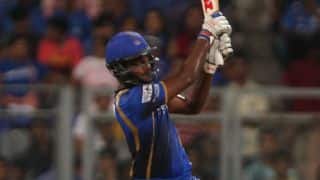