Needing 12 off the final over, bowled by Kieron Pollard, Chawla (1 not out off 7 balls) played out a few dot balls.

Mumbai: Bangladesh all-rounder Shakib Al Hasan defended Kolkata Knight Riders teammate Piyush Chawla for not taking the defending champions across the finish line with his bat in the last over of their IPL cricket match against Mumbai Indians. Needing 12 off the final over, bowled by Kieron Pollard, to overtake the home team’s total of 171 for four, Chawla (1 not out off 7 balls) played out a few dot balls and KKR were stopped at 166 for seven to lose the game by five runs at the Wankhede Stadium, here last night. READ: Mumbai Indians vs Kolkata Knight Riders, IPL 2015, Match 51: Highlights

“He [Pollard] bowled well, but we could have executed our shot selection better. Twelve runs in the last over always bring pressure on the batsmen. If you can’t make the right selection it will be difficult. Sometimes it goes for you and other times, it goes against. We are all humans and we all make mistakes,” said Shakib about leg spinner Chawla’s inability to guide KKR to a win that would have gained them a play-off spot.

Shakib, who bowled superbly by taking 2 for 22 on his return to IPL after representing his country in the home series against Pakistan, rued that his team had allowed MI to score over 70 runs at the death. SCORECARD: MI vs KKR IPL 2015 Match 51

“They scored too many runs in last five overs; they scored around 70 runs, but it can happen in a T20 game. We did not play near our best, it was a close game. It was disappointing we had our chances. In a T20 game one or two overs can change the game, that’s what happened today.”

He said there were some zones where the team can improve ahead of their make-or-break game against Rajasthan Royals, who also need a win to qualify for the last four. “There are some areas which we need to improve before our last game. It’s a do or die game to make the semi finals (play-offs) we will do our best to win it, try to improve in some areas where it needs improvement. Will give 100 per cent and hopefully the result will come in our way.

“Today we started well with the ball. It was in the way we finished in the last five, that part we can obviously improve. I thought whoever gets in should also finish the job, that’s what we didn’t do. Some of our guys were set but could not go on and finish the game. These are some of the areas we can improve on.” 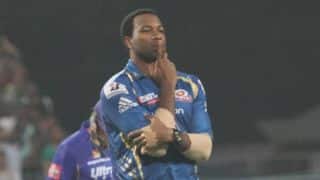