Wicket-keeper Shazad has suffered a knee injury which has ruled him out of further participation in the event.

The ICC has confirmed that the Event Technical Committee of the ICC Cricket World Cup 2019 has approved Ikram Ali Khil as a replacement player for Mohammad Shahzad in the Afghanistan squad for the remainder of the tournament.

Wicket-keeper Shazad has suffered a knee injury which has ruled him out of further participation in the event.

The Afghan opener was dismissed without scoring in their opening game against Australia and made just seven against Sri Lanka in Cardiff before being one of Lasith Malinga‘s three victims.

Ikram Ali Khil has just two ODI matches to his name, debuting against ireland in Dehradun in March 2019. The 18-year-old was also part of Afghanistan’s squad at the 2016 U19 Cricket World Cup in Bangladesh and also at the 2018 edition in New Zealand. He played a pivotal role in Afghanistan’s Asian Cricket Council U19 Cup triumph, scoring an unbeaten ton in the 2017 final and has one Test cap for Afghanistan in their historic debut against India in March.

The replacement of a player requires the approval of the Event Technical Committee before the replacement player can be officially added to the squad. 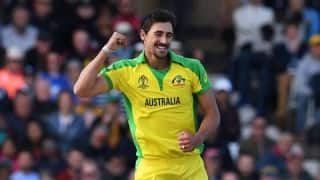