India produced a disciplined allround performance to notch up a convincing seven-wicket victory over the West Indies in a rain-affected second One-Day International and also take a 2-0 lead in the five-match series. 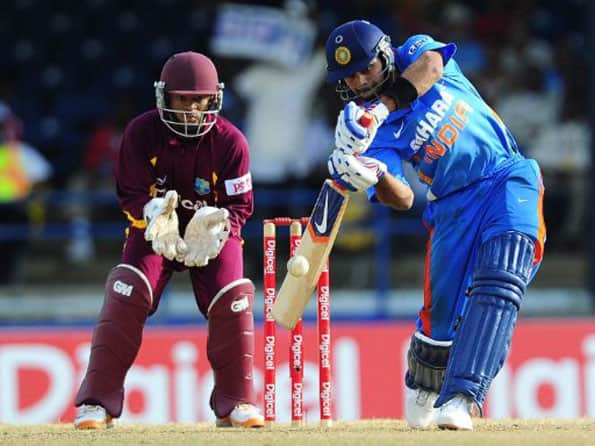 Virat Kohli plays a shot during his innings of 81 AFP

India produced a disciplined allround performance to notch up a convincing seven-wicket victory over the West Indies in a rain-affected second one-Day International and also take a 2-0 lead in the five-match series.

Chasing 241 to win, India were 100 for one in 22 overs when a sharp passing shower made the square unfit to play for 85 minutes. The rain break reduced the visitors innings to 37 overs and the target was revised to 183, implying they needed 83 runs from 90 deliveries.

India achieved the target comfortably losing the wickets of Parthiv Patel (56) and Virat Kohli (81) in 33.4 overs.

Earlier, India restricted West Indies to 240 for nine after skipper Suresh Raina won the toss and elected to field at the Queen’s Park Oval. Amit Mishra (4/31) and Munaf Patel (3/35) struck in the late moments to stop the runflow and trigger a collapse after the Caribbeans went off to a good start.

For the hosts, Ramnaresh Sarwan (56) and Lendl Simmons (53) cracked individual half-centuries up the order but their middle-order crumbled, slipping from 175 for three in 34 overs to 229 for nine in 48.5 overs.

Chasing the revised target, Patel left early, caught behind off a tickle, but Kohli held firm and was well supported by stand-in skipper Suresh Raina (26) who brought an early end to the innings. India were off to a poor start when left-handed opener Shikhar Dhawan (3) guided a Ravi Rampaul delivery into the hands of gully fielder.

But Kohli was in his element from the very start and rarely hit the ball in the air, a contrast with Parthiv Patel who scooped and flicked in vacant places at will. Kohli completed his 2000 runs in ODI internationals with a sweep off Devendra Bishoo. It has taken him only 53 innings — the second fastest behind the joint record holder Navjot Singh Sidhu and Sourav Ganguly (52 innings each).

None of the West Indian bowlers made any impression and the biggest flops were the local boys — Kieron Pollard and Dwayne Bravo — who made little impression with either bat or ball. Patel, during his gritty knock, faced 64 balls and hit two fours and two sixes.

Kohli, who hit six fours and one six in his 103-ball innings, was finally dismissed in the last ball of the 31st over when looking for a six, he ended up holing out to Pollard off Bishoo at long-off.

Raina’s brief cameo of runs came off 19 balls and contained one four and a six. Earlier, leg-spinner Mishra took four for 31 with his sharply turning leg-breaks to keep West Indies down to 240 for nine after the hosts had threatened to run up a bigger total at one stage.

Munaf Patel (3 for 35) too played a good supporting hand as the West Indies lost six wickets for 48 runs in the final nine overs. An entertaining 36 for Marlon Samuels and a hectic eighth wicket 31-run stand between skipper Darren Sammy (22 not out) and Ravi Rampaul (14) gave the Caribbeans some momentum but in the end the total was not enough.

Earlier, openers Simmons and Kirk Edwards (25) provided the perfect platform with 57 runs by the 13th over as they feasted on some rugged fielding and wayward bowling. Edwards’ first four flicked bowler Munaf Patel’s raised hand to go to long-on fence and the next one was crashed past covers in the fourth over.

Moving into his stride, Edwards smote Praveen Kumar at the other end over mid-on, hurrying Indians to bring on leg-spinner Amit Mishra in the eighth over. Simmons survived a caught behind in the 10th over after Munaf Patel overstepped the bowling crease. Mishra was impressive from the word go but Simmons was confident enough to sweep him for four.

Harbhajan Singh, introduced in the 12th over, had a horrid start as he either bowled too wide or too full to go for 24 runs in his first two overs. There were two deliveries which spun past leg stump to go for wide fours and then Edwards launched into a ferocious hit straight down the ground for a six. Mishra gave Indians the first breakthrough after a sharply turning leg-break took the edge of Edwards’ bat to nestle into the gloves of Parthiv Patel.

However, Simmons was unperturbed as he smacked Mishra over midwicket for a six and later dished out the same treatment to Yusuf Pathan to bring up his half century in the 25th over with the score reading 114 for one.

New man Sarwan and Simmons forged a 67-run partnership before the opener was departed in the 27th over in a rather ungainly manner when he rushed down the wicket and Patel stumped him off a wide delivery.

Sarwan though had dropped anchor at the other end and once powerfully square cut Harbhajan to the fence and then deftly guided Munaf past vacant slips for four. His new partner Marlon Samuels was more aggressive as he stylishly drove Mishra to the cover fence and then pulled Yusuf behind square leg for another four.

In this eventful over, he smote the next ball for a six but then was fooled by a slow wide floater to be out stumped.

Sarwan then brought up his 37th ODI fifty with a boundary of Praveen Kumar but the right-handed batsman gifted his wicket away, hitting a rank full toss from Munaf Patel into the hands of the deep square leg fielder Mishra.

With Pollard next in line, West Indies asked for the batting powerplay at 192 for four in the 42nd overs and it turned out to be a disaster spell for them.

Pollard survived three ball before his attempted sweep made him a leg-before candidate for naught. Bravo (8) stroked one in the deep as if to give catching practice to Harbhajan and wicketkeeper Carlton Baugh completely misjudged a googly from Mishra to be bowled.

Skipper Sammy and Rampaul then freed their arms for some entertaining hits before Munaf ended the pyrotechnics of this pair with two wickets in his final over. Rampaul was caught in the deep and young Bishoo could only guide a rising delivery into the hands of the wicketkeeper.