BJP have said that the strike will end at 6 PM on April 30.

Kolkata: In a reprieve to fans of the Indian Premier League, the Bharatiya Janata Party (BJP) on Tuesday called for reducing its 12 hour-shutdown by two hours on April 30, the day when Kolkata Knight Riders (KKR) take on Chennai Super Kings (CSK). Both the BJP and the Left Front have called strikes against “destruction of democracy” by the ruling Trinamool Congress in the recent civic polls. This prompted the Cricket Association of Bengal (CAB) to write to the parties urging them to reconsider their decision.

“The CAB has requested to shorten the duration of the strike. In view of the scheduled IPL match, I ask you to reduce the duration of the shutdown to 10 hours,” West Bengal BJP president Rahul Sinha said. On Sunday, Left Front chairman Biman Bose asserted that the holding of the match should not be a problem as the strike would be over by 6 PM — two hours before the start of the IPL game. READ: CAB ask political parties to call off strike

Bose also said the Left Front leadership had appealed to the trade unions to reduce the duration of their planned 24-hour protest to 12 hours. Four Left trade unions as also the Congress-affiliated INTUC and the Hind Mazdoor Sabha have called for a 24-hour general strike on the same day articulating the same demand. 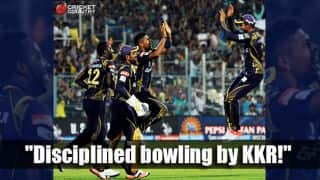