Earlier Scorchers won the toss and decided to bat first in their second game in the CLT20.

Kolkata Knight Riders (KKR) spinners, specially Kuldeep Yadav brought his team back in the game against the Perth Scorchers with two wickets after the Scorchers openers made a good start against. Both openers Craig Simmons and Adam Voges played well and the KKR bowlers found it difficult to control them. The Australian champions reached 87 for two after 13 overs.

Earlier Scorchers won the toss and decided to bat first in their second game in the Champion’s League T20 2014 (CLT20) against KKR in Hyderabad. Adam Voges, the Scorchers captain said they would like to put a score first up and give pressure to the KKR batsmen. Gautam Gambhir the KKR captain on the other hand said they would have bowled first. 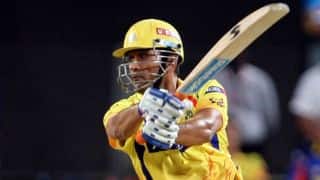