Voges, the Scorchers skipper played a captain's knock. He remained not out on 71.

Perth Scorchers reached a competitive 151 for seven in their allotted 20 overs against Kolkata Knight Riders (KKR) in the important Champions League (CLT20) 2014 Group A game in Hyderabad. They were threatened to make more as the openers Craig Simmons and Adam Voges played well up front and gave the team a solid start. But KKR spinners, specially Kuldeep Yadav and Sunil Narine brought his team back. Kuldeep took three wickets and Narine took four.

Scorchers were at one time 65 for no loss after eight overs. From there Yadav and Narine change the game for KKR. Voges, the Scorchers skipper played a captain’s knock. He hold one end up and scored freely through out. But apart from Simmons and wicketkeeper batsman Sam Whiteman no one contributed much with bat. Voges remained not out on 71.

Earlier Scorchers won the toss and decided to bat first in their second game in the Champion’s League T20 2014 (CLT20) against KKR in Hyderabad. Voges, the Scorchers captain said they would like to put a score first up and give pressure to the KKR batsmen. Gautam Gambhir the KKR captain on the other hand said they would have bowled first. 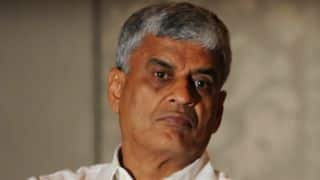