Soon after KKR recorded a three-wicket win over Kings XI Punjab (KXIP) in the IPL final, Mamta conveyed her congratulations to the team in a post on social networking side Facebook. “Congratulations… KKR… Congratulations…shahrukh” she said in the Facebook post.

In 2012, when KKR lifted the IPL trophy for the first time, the chief minister had feted the team outside the state secretariat Writers’ Buildings and then travelled in the team bus. She also travelled with Shahrukh to the jam-packed Eden Gardens where a civic reception was given to the victorious side. A cultural gala was also organised.

KKR have plans to celebrate the latest win in a similar grand style. 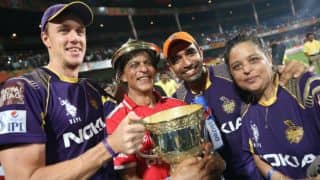