This was perhaps one of the most one-sided games of Hong Kong T20 Blitz 2017 so far.

Kowloon Cantons won their second game of the day, this time against Galaxy Gladiators Lantau, by a whopping 64-run margin in Match 9 of the Hong Kong T20 Blitz 2017 at Mission Road Cricket Ground at Mong Kok. With this, they have qualified for the final of the tournament, scheduled to be played on Sunday. This was perhaps one of the most one-sided games of the tournament so far. Barring skipper Anshuman Rath s 13-ball 31, none of the players in the top-order stepped up. The Galaxy Gladiators kept losing wicket at regular intervals and as a result never found any sort of momentum to chase a mammoth target of 221 runs. Nizakat Khan s ton in vain as City Kaitak beat Hung Hom JD Jaguars by 5 wickets

However, Ryan ten Doeschate and Mohammad Awais scored some runs lower down the order, but that was never going to be enough, after their team was 6 wickets down in the ninth over. 62 apiece from skipper Babar Hayat and Calum Macleod saw Kowloon Cantons put up an impressive total of 220 for 3 on the board.

Dwayne Smith (38) and Ashar Zaidi (26) too played a major part in ensuring that the Cantons put on a mammoth total on the board. Smith chipped in with the ball as well. He removed Rath and Jesse Ryder to put his side in command. His international teammate Marlon Samuels too finished with impressive figures of 2 for 17 in his 4 overs. HK T20 Blitz 2017, Match 7: Samuels all-round show inspires Kowloon Cantons to 44-run win over Hong Kong Island United

With this loss, the Galaxy Gladiators crashed out of the tournament and the Cantons are assured of a place in the final. The match between Hong Kong Island United and City Kaitak on Sunday is going to be crucial. If Kaitak win, they make it to the final, but if United manage to beat Kaitak by a huge margin, they will qualify. It s expected to be an exciting final day on Sunday!

Man of the Match: Babar Hayat 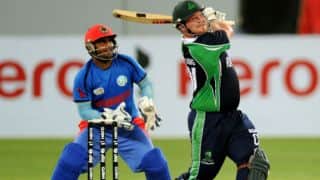