Whangarei: India A off-spinner Krishnappa Gowtham returned with an impressive six-wicket haul to dismiss New Zealand A for 398 in their first innings in the third unofficial Test on Sunday. The 30-year-old Gowtham finished with figures of 46.4-10-139-6.

The visitors were 38 for one in 14 overs at the draw of stumps on day three. Ravikumar Samarth (27 not out) and Ankit Bawne (5 not out) were on the crease after Abhimanyu Easwaran was dismissed in the seventh over.

ALSO READ: India A vs New Zealand A: Five-for for Doug Bracewell

Earlier, resuming from 121 for 3, New Zealand managed to take a 75-run first-innings lead, riding on right-hand batsman Cameron Fletcher’s career-best innings of 103. Fletcher hit seven boundaries and a six in his 221-balls innings.

The trio of Tim Seifert (86), Doug Bracewell (55) and Kyle Jamieson (53) also chipped in for New Zealand with half centuries.

Bracewell’s innings was studded with nine boundaries. He was dismissed by Navdeep Saini with the host at 257 for six. The duo of Fletcher and Jamieson then put up a 100 run stand which ended with Gowtham dismissing the latter. 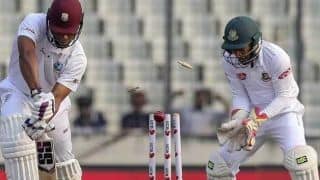 As batsmen, we did not do our jobs: West Indies captain Kraigg Brathwaite 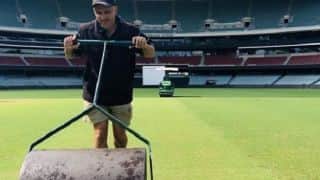