Mumbai Indians took a significant step in ensuring that they made it to the IPL 2016 playoffs.

Krunal Pandya’s all-round show along with brilliant bowling by Jasprit Bumrah was enough for Mumbai Indians (MI) to register a 80-run win over Delhi Daredevils (DD) in Indian Premier League (IPL) 2016 match 47 at Visakapatnam. With this win MI go to 14 points and surge up to third in the IPL 2016 table. DD still continue to stay in the hunt to make it to the playoffs , but have slumped to fifth position. This huge win has certainly done MI’s net run rate a world of good. DD never looked in the hunt as they lost wickets at regular intervals. Quinton de Lock was the only one looking good, but after he departed for  40 off 28, it was more or less curtains for DD. . FULL CRICKET SCORECARD: Mumbai Indians vs Delhi Daredevils, IPL 2016, Match 47 at Visakhapatnam

De Kock will however consider himself unlucky once again as he did not hit the ball, yet was adjudged caught behind off Krunal’s bowling. Jasprit Bumrah too bowled exceedingly well. He picked two wickets off consecutive deliveries to send JP Duminy and Rishabh Pant back to the pavilion. Surprisingly, he was not brought on to bowl the next over despite being on a hat-trick. Full Cricket Updates Mumbai Indians (MI) vs Delhi Daredevils (DD), IPL 2016, Match 47 at Visakhapatnam

Bumrah then came back into the attack after changing ends and struck off his third delivery of his over, removing Amit Mishra for one. Chris Morris played a blinder against Gujarat Lions (GL) earlier in the season and was expected to play a similar role in this match as well, but was not able to provide such a performance.

But with the required run rate going past 20 in the last four overs, DD were just about playing out the overs as it could eventually come down to run rate to determine which team goes through to the playoffs.

Earlier, Krunal Pandya smashed it all around the park to take MI to 206 for 4 in their 20 overs against DD. He was well supported by Martin Guptill , who missed out on scoring his maiden IPL fifty and was dismissed for 42-ball 48. Guptill and krunal put on 98 for the second wicket, which set up things for MI beautifully. Krunal, to everyone’s surprise came in at No. 3 ahead of the likes of Ambati Rayudu, Jos Buttler and Kieron Pollard He justified his promotion with a scintillating innings

Pollard walked in at No. 4 and was a mere spectator as Krunal was smashing it everywhere. Krunal was particularly severe on Amit Mishra, who went for 42 runs in his four overs. Even Imran Tahir was not spared as he went for over 59 runs in his spell. Tahir therefore becomes the most expensive bowler in IPL 2016, surpassing 58 runs hot off Karn Sharma. Krunal hit as many as seven fours and six sixes as he was cleaned up by Chris Morris for 37-ball 86. Jos Buttler and Ambati Rayudu then took MI to the brink of 200, after Pollard played a strange shot to get out.

Chris Morris was the best bowler for DD. He went for just 34 runs in four overs and also picked up a couple of wickets, including the crucial wicket of Krunal. DD will have their work cut out. Their top-order consisting  of Quniton de Kock, Sanju Samson and Karun Nair will have to the bulk of scoring. JP Duminy too will have to return to form in this match, else DD might find it extremely tough to win from here.

DD had won the toss and elected to bat first. Zaheer Khan and Imran Tahir are back in the team for DD. Guptill’s inclusion has added a major boost for MI. He is n excellent fielder as well and can save some crucial runs for the team. Guptill makes his way into the team in place of Tim Southee. Indian medium pacer Vinay Kumar too finds a place in the playing XI.

Man of the match: Krunal Pandya 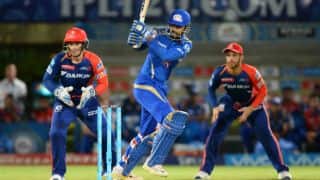