KL Rahul says no side could have coped with Indian wrist-spinner Kuldeep Yadav's devastating spell in the eight wicket win over England in the first of their three match T20 series.

KL Rahul says no side could have coped with Indian wrist-spinner Kuldeep Yadav‘s devastating spell in the eight wicket win over England in the first of their three match T20 series. Yadav’s 5-24 – including three wickets in one over – was followed up by Rahul scoring an unbeaten 101 and the latter is hoping for more of the same in Cardiff on Friday for the second match.

“I don’t think it is just England,” said Rahul at the eve of match press conference about their batting being exposed against spin. “A good wrist-spinner is a good wrist-spinner against any opposition. With the kind of skill and quality Kuldeep and Yuzvendra Chahal have, it’s always going to be hard for a team that doesn’t play spin a lot. What Kuldeep did was special – (to bowl) balls like that against (Jonny) Bairstow and (Joe) Root, (it) is always hard for a middle-order batsman,” he concurred.

Rahul for his part is hoping now he has ended his century drought – he had not scored one since his stunning 199 against England in the fifth Test in Chennai in December 2016 – another is in the offing. “For a lot of us, it is our first time here in the UK — so every opportunity is gold for us, I wanted it really badly and I’m very happy that it came here in England, in the first game of the series. I hope I can carry that confidence forward and use the form and make it big,” he said. 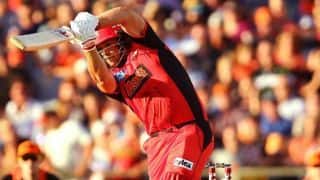