Kuldeep Yadav was brilliant on the field on his debut but equally impressive was his spunky answers after the day's play.

Dharamsala: Young Chinaman bowler Kuldeep Yadav, who on Saturday made a memorable debut with a four-wicket haul against Australia, revealed that legendary Shane Warne taught him to bowl the flipper which he used to get his maiden Test wicket of David Warner. At the start of the Test series in Pune, chief coach Anil Kumble took Kuldeep to Warne for a session and it paid dividends. FULL CRICKET SCORECARD: India vs Australia, 4th Test at Dharamsala

Asked about the kind of tips he got from Warne, the 22-year-old Kuldeep’s reply brought the house down. “Did you see the first wicket (that of Warner)? That was not a chinaman. It was a flipper which I learnt from Shane Warne. So learning from Warne and then getting out his countryman is a nice feeling,” Kuldeep replied cheekily as everyone had a hearty laugh. For Kuldeep, it was a dream come true to meet Warne and talk about the art of spin bowling. “My idol is Shane Warne and I have followed him since my childhood. I only watch his videos and it was a dream-come-true when I met him. I could not believe I was speaking to my idol and sharing my thoughts on bowling and what all I should be doing. I did exactly what he (Warne) told me to do. He has promised that he will have another session with me in near future,” the youngster said. Full Cricket Updates, India vs Australia 2017, 4th Test at Dharamsala, Day 1

Kuldeep was brilliant on the field on his debut but equally impressive was his spunky answers after the day’s play. Questioned about how difficult it was to bowl to centurion Steve Smith, the answer had a lot conviction. “I bowled to Smith for the first time and I did not have any difficulty as he was not playing any strokes against me.

What kind of notes did @imkuldeep18 take from @ShaneWarne? The Chinaman gives a funny twist to it #TeamIndia #INDvAUS pic.twitter.com/5Yy1x0oIzh

May be he did not want to take any chance against me and was depending on singles. It might be that wickets were falling at the other end, he was being cautious. I was never nervous against Smith,” he said.

And then, Kuldeep said something that indicated maturity beyond his years. “From childhood I have been told that spinner is someone who would take wickets even if he gets hit (Spinner woh hain jo maar bhi khaaye aur wickets bhi leta rahein). My theory remains the same,” he said.

Kuldeep is satisfied that his execution against Glenn Maxwell and Peter Handscomb went as per plan. “All four are precious scalps and first one (Warner) is very special. The next two (Handscomb and Maxwell) were satisfying as you got them exactly how you had visualised their dismissals.” 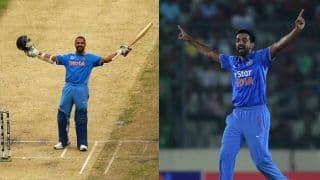