Former India captain and current Karnataka State Cricket Association (KSCA) president Anil Kumble has suggested BCCI to find ways to include two or three warm-up first class games in the run-up to the opening Test against hosts Australia when India visit Down Under later this year. 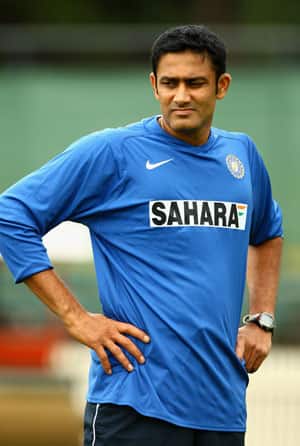 Former India captain and current Karnataka State Cricket Association (KSCA) president Anil Kumble has suggested BCCI to find ways to include two or three warm-up first class games in the run-up to the opening Test against hosts Australia when India visit Down Under later this year.

Kumble’s suggestion came on Sunday following widespread criticism of the schedule prepared for the team in the ongoing Test series against England that, experts feel, has led to the Indian squad’s disastrous outing which has seen it squandering the series by trailing the hosts 0-3 with one match left.

The Indian squad, led by Mahendra Singh Dhoni, played a lone first class game against Somerset during the ongoing tour of England before sliding to massive defeats in the first three Tests to also lose its No. 1 Test ranking which it had held on to for more than a year-and-a-half.

At Sunday’s Working Committee meeting of the BCCI here, Kumble’s suggestion to the Board to pencil in two more first class games to the one already scheduled ahead of the opening Boxing Day (Dec 26) Test at Melbourne “was accepted”, sources said.

“Kumble said that if only one first-class game is fixed only 11 players will be able to play in it and he wanted all 16 touring members to have a competitive game before the start of the Test series by having more games. His suggestion has been accepted,” they said.

The sources conceded it will be a tricky task for the Board to try and add one more first-class game in the tune-up to the tour as there was hardly any time gap between the conclusion of the home ODI series against the West Indies and the departure of the team to Australia.

The BCCI has also written to Cricket Australia that the first-class game that is already scheduled should not be reduced to a club-level affair as it clashed with the commencement of the country’s “Big Bash” T20 tournament.

“The Board has already written (to Cricket Australia) that it should not be reduced to club-level cricket with the top players not playing,” the sources said.

The lone warm-up game is to be played against Cricket Australia Chairman’s XI from December 18-21 at Manuka Oval in Canberra, before the opening contest of the four-match Test series.

India are then set to play two T20 Internationals on February 1 and 3 at Sydney and Melbourne before taking part in a triangular ODI series also featuring the hosts and Sri Lanka between February 5 and March 8.

Meanwhile, the Board has made a net profit of Rs 163 crore in the last fiscal which does not include income from the International Cricket Council-organised World Cup as it ended on April 2 and would get computed only at the end of the current financial year, the sources maintained.

“Otherwise the profit is to the tune of Rs 260 crore,” they added.

Net profit would have been Rs 20 crore more but for the cutting short of the tour by England in the aftermath of 26/11 terror attacks in Mumbai which resulted in cancellation of a few matches and consequently loss in revenue from TV rights, the sources explained further.(PTI)