Currently, Sri Lanka are 29 for the loss of three wickets in five overs with Angelo Mathews on eight.

Three top order batsmen in the form of Kusal Perera, Tillakaratne Dilshan, Kithuruwan Vithange were dismissed for mere single figures against Pakistan, in the first of the two-match T20I series at the R Premadasa Stadium in Colombo on Thursday. Currently, Sri Lanka are 29 for the loss of three wickets in five overs with Angelo Mathews on eight and Dhananjaya de Silva on nine. Earlier, Pakistan skipper, Shahid Afridi won the toss and elected to bat first as Pakistan put up a challenging total of 175 for the loss of five wickets in 20 Overs, courtsesy of big innings from Ahmed Shehzad, Shoaib Malik and Umar Akmal. Sarfraz Ahmed has been dropped and Umar Akmal comes in while Sri Lanka move in with a fairly strong squad. LIVE SCORECARD: Sri Lanka vs Pakistan 2015, 1st T20I at Colombo

Hosts, Sri Lanka take on South Asian neighbours and former World T20 International (T20I) champions, Pakistan in the first of the two-match T20I series at the R Premadasa Stadium in Colombo on Thursday. Sri Lanka, who lost both the Test and One-Day International (ODI) series against the visitors, would look to come up with improved performance in the shortest version of the game and further look to clinch the series in order to finish the tour on a high. This would be the last and important series for Sri Lanka as a loss here could result in great loss of morale. Sri Lanka are also the no. 1 team ICC World T20 rankings. LIVE UPDATES: Sri Lanka vs Pakistan 2015, 1st T20I at Colombo

With the game being played on the moderate tracks of R Premadasa at Colombo, it expected to be an even and fair contest. However, considering both the teams, indeed Pakistan have a better squad compared to that of Sri Lanka and have a high chance to win the T20 series as well. 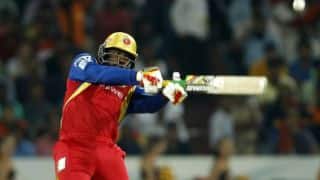