Waugh also stated that he would have picked Glenn Maxwell for the Pakistan Tests series owing to his game-changing abilities.

Australia slumped to 202 all out after being 142/0 in the first innings of the 1st Test against Pakistan, imploding in the final two session of day three and in former Australia international Mark Waugh s opinion, the Australian batsmen failed to counter the reverse swing of Mohammad Abbas, as they lacked focus.

“To me, they’re not watching the ball closely enough. They’re thinking about other things, they’re not focusing on that delivery. Abbas is a good bowler, but he should not get 4 for 29 bowling at that pace. If it’s Waqar Younis or Brett Lee, okay… 4 for 29 is acceptable. But not a medium-fast bowler,” said Waugh, who had resigned as selector earlier this year.

Waugh also stated that he would have picked Glenn Maxwell for the Pakistan Tests series owing to his game-changing abilities.

“I think he’s a guy with ability, can change the game, he’s a good player of spin, he can actually take the attack to the bowling side, Waugh told ESPN Cricinfo ahead of the fourth day s play of the first Test in Dubai.

Maxwell s exclusion from the squad came as a surprise for many, after the allrounder was asked to rest for the Australia A series in India played before the team for UAE was picked. Travis Head, Marnus Labuschagne and Michael Neser earned maiden call ups with impressive performances in that tour, with Head and Labuschagne going on to make Test debuts in the first Test.

Waugh said Maxwell would have made a big difference in the Australian unit, which is missing their two best players in David Warner and Steve Smith – both banned for an year over ball tampering charges.

“It’s tough because we’ve lost our two best batsmen, haven’t we? And three counting [Cameron] Bancroft, so there’s only a certain pool of players that are good enough to play Test cricket. It’s not the time to panic, I don’t think there are many players there that would make a big difference – the only player I would have picked is Glenn Maxwell, that’s not there, said Waugh, who played 128 Test for Australia scoring 8029 at 41.81. 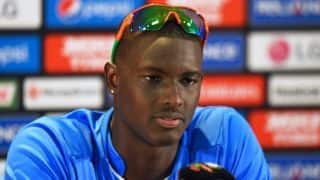