The two players were charged under Article 2.1.1, which relates to 'conduct that is contrary to the spirit of the game'.

Sri Lankan cricketers Lahiru Thirimanne and Dhammika Prasad were fined 50 per cent of their match fees after the third and final Test against India at the Sinhalese Sports Club in Colombo on Tuesday. India drubbed Sri Lanka by 117 runs as the tourists completed a series win after almost 22 years. The match saw players getting into altercations far too often, and one Sri Lankan cricketer and the Indian paceman Ishant Sharma suffered heavily for that. Dinesh Chandimal was banned from Sri Lanka’s next One-Day International (ODI) match, whereas Ishant was banned from India’s next Test, which is in November first week against the might of South Africa. Full cricket scorecard: India vs Sri Lanka, 3rd Test, Colombo, Day 5

The International Cricket Council (ICC) informed on Tuesday evening in a release, “Three Sri Lanka players and India’s Ishant Sharma have been found guilty of breaching the ICC Code of Conduct in two separate incidents during the penultimate day’s play in the third Test against India at the Sinhalese Sports Club (SSC) in Colombo. Dinesh Chandimal has been handed one Suspension Point* for breaching Article 2.2.7 of the ICC Code of Conduct, which relates to ‘inappropriate and deliberate physical contact with a Player’.” READ: Did Ishant Sharma and Dhammika Prasad really cross a line in India vs Sri Lanka 2015, 3rd Test?

The release added, “This means Chandimal will miss Sri Lanka’s next One-Day International, which will be against the West Indies on 1 November at the R.Premadasa Stadium in Colombo. The incident happened in the 76th over when Chandimal made deliberate physical contact with Sharma when India’s number-11 batsman was in the middle of a heated exchange with fast bowler Dhammika Prasad.” Virat Kohli: Ishant Sharma’s altercation with Dhammika Prasad happened at the right time

ICC continued, “Just before the contact between Chandimal and Sharma, Lahiru Thirimanne had twice ignored the umpires’ warnings not to get involved in the incident. For their roles in the incident, both Thirimanne and Prasad have been fined 50 per cent of their match fees. The two players were charged under Article 2.1.1, which relates to ‘conduct that is contrary to the spirit of the game’.” VIDEO: Ishant Sharma-Dhammika Prasad ugly spat on Day 4 of India vs Sri Lanka 3rd Test at Colombo SSC 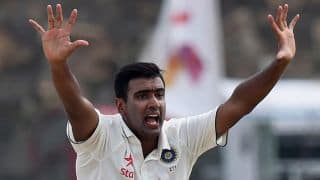 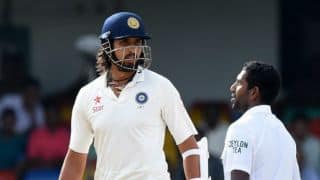