Modi also thought the teams should have been banned for life.

“Lodha committee report is just the first step. It is not an end but has to be taken as a starting point. This is just the start,” this was one of Modi’s many tweets after the Supreme Court-appointed panel suspended CSK and RR for two years besides suspending Gurunath Meiyappan and Raj Kundra for life. Raj Kundra shocked and disappointed with IPL Verdict

“Great outcome for justice and integrity. No surprise first honest decision on Indian cricket and it comes from outside the BCCI,” he wrote.

“CSK and Rajasthan Royals have got away with lighter punishment – they should have been banned completely and not merely for 2 years.”

He was scathing in his criticism for the BCCI. IPL Verdict: Governing Council calls emergency meeting on July 19

“BCCI cover up failed only because the courts intervened. Is this the way a public body should have functioned. Shame,” he said.

On the way ahead for the IPL without the two teams, Modi wrote: “BCCI needs to sell it via a proper, transparent bidding process to the highest bidder – rather than Srini’s proposed scam trust group.” IPL Verdict: We may not take any legal recourse, says CSK senior official

He further said N Srinivasan, father-in-law of Meiyappan, had no right to continue as ICC Chairman.

“There should be not even a days delay in this happening. The @Icc rules clearly state it. Wake up all members,” he wrote. IPL Verdict: BCCI is committed to honour and respect judicial decisions, says Jagmohan Dalmiya 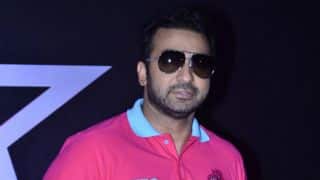