Dalmiya, however, asserted that the BCCI is committed to ensuring transparency.

New Delhi: Welcoming the Justice RS Lodha committee verdict on the IPL spot-fixing and betting scandal, BCCI President Jagmohan Dalmiya today said the Board is “committed to honour and respect judicial decisions” but will go through the contents of the panel’s report before reacting to it. ED conducts multiple searches for IPL betting

“BCCI is committed to honour and respect judicial decisions and it would give its observations after the entire report is read and a collective decision is taken,” Dalmiya was quoted as saying in a BCCI media release.

Dalmiya, however, asserted that the BCCI is committed to ensuring transparency, accountability and cleansing the sport in order to restore the faith and confidence of millions of cricket-loving people in the game of cricket in general and IPL in particular. 9 IPL players who played for discontinued teams

Secretary Anurag Thakur on his part said, “We respect the verdict and would undertake a collective decision in a transparent manner, in the right direction and in the larger interest of the game after the verdict is received and analysed.”

The release stated that BCCI will not make further comments on this issue. IPL Verdict: Which players could attract bidders from suspended CSK, RR team?

Chennai Super Kings (CSK), two-time champions in the IPL, and Rajasthan Royals (RR) were suspended from the cash-rich cricket league for two years for the betting activities of their key officials Gurunath Meiyappan and Raj Kundra during the 2013 season.

Meiyappan, the former Team Principal of CSK, and Kundra, co-owner of the Rajasthan Royals, were suspended for life for indulging in betting and bringing the IPL and the game into disrepute. IPL Verdict: Anurag Thakur welcomes Lodha panel’s landmark decision 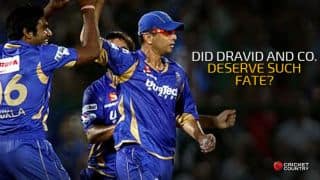 Rahul Dravid and innocent Rajasthan Royals cricketers, we feel sorry for you 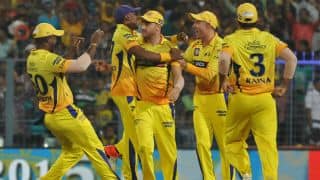