Lasith Malinga therefore becomes only the fifth bowler in T20Is to pick up a hat-trick.

Earlier, Bangladesh had got off to a flying start, thanks to their openers Imrul Kayes and Soumya Sarkar. They brought up the team fifty in the fifth over, and put on 71 in just 6.3 overs for the first wicket, which included 68 runs in the Powerplay overs. Sarkar was the first to go for 34 off 17, giving an easy catch back to Gunaratne off his own bowling in his very first over. Live Cricket Updates: Bangladesh vs Sri Lanka, 2nd T20I

Sri Lanka were then gifted a wicket when Kayes, in an attempt to get a quick single, was run out for a well-made 25-ball 36. Sabbir Rahman and Shakib Al Hasan added 46 for the third wicket, which gave Bangladesh the momentum back. But Shabbir (19) and Shakib (38) were dismissed in quick succession, which gave Sri Lanka an outside chance of perhaps restricting Bangladesh to about 170. Once again Bangladesh put their hopes on Mosaddek Hossain and Mahmudullah to take them to a good score just like they did in the first game.

Mosaddek started well. He hit Lasith Malinga for six and four off consecutive deliveries, but was cleaned up by Thisara soon afterwards. Sri Lanka kept chipping away with the wickets in the end and managed to restrict Bangladesh to a decent score. At one stage Bangladesh looked all but set to get past 200, but some excellent bowling in the death bowling from Malinga and co. ensured that the score was kept under check.

Mortaza had earlier won the toss and elected to bat first in his final T20I. Bangladesh made a couple of changes to their line-up: Tamim Iqbal, out with a back injury, was replaced by Kayes; Mehedi, on the other hand, replaced fast bowler Taskin Ahmed. Sri Lanka lead the two-match series 1-0 after an emphatic 6-wicket win in the first game. 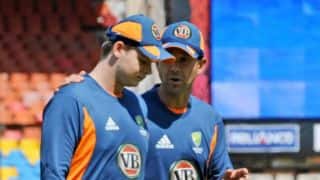