The England opener, who was wearing a neck guard, was hit while receiving throw-downs.

Jason Roy has been cleared to play the third Ashes Test starting August 22 after passing concussion tests today, which were required following the England opener being struck by a bouncer in the nets on Tuesday.

Roy was hit while receiving throw-downs from Marcus Trescothick at Headingley and was checked for signs of concussion on Wednesday. He passed those tests, and England will take a call after another round of examinations on match morning.

It was reported by Sky Sports that Roy, who was wearing a neck guard, doubled over in pain and then removed his helmet.

The Surrey batsman passed tests soon after the incident, but his county team-mate Ollie Pope was quickly put on standby after scoring an unbeaten 176 against Hampshire in the ongoing County Championship.

Australia batsman Steve Smith has been ruled out of the Leeds Test after suffering concussion following a blow to the neck from Jofra Archer at Lord’s on the weekend.

Roy, 29, made his Test debut against Ireland last month after a strong World Cup campaign. He made 5 and 72 in that Test, and since then has tallied 40 runs in four innings against Australia.

England coach Trevor Bayliss has hinted at changes to the batting order for the third Ashes Test. 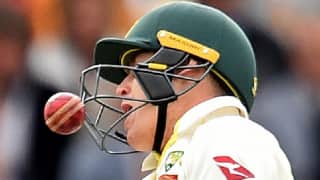