Smith’s batting average is an excellent 62.96 in Test cricket but it reduces to 34.9 when only runs against left-arm spinners are taken into account.

Going by these numbers, England have dropped struggling Moeen Ali and in his stead picked left-arm spinner Jack Leach to counter Smith who scored two centuries at Edgbaston that set up a big 251-run win for Australia.

READ: Broad reveals how England can send shockwaves through Australia

But Lehmann feels the surfaces on which Smith has apparently struggled to counter quality left-spinners have been rank turners and so the Australian’s average isn’t that bad.

During Australia’s tour of Sri Lanka in 2016, Rangana Herath accounted for Smith five times in six innings. In 2017, when Australia toured India, Smith topped the run-charts scoring 499 across eight innings and fell thrice to Ravindra Jadeja, a left-arm spinner.

Lehmann, who was the Australia coach on both the occasions, sees them as coincidence rather than a pattern. “He still averaged quite well and made runs, it just happened he got out to left-arm spin and that’s more because of the way the wickets were spinning than anything else,” he opined.

Lehmann isn’t the first to dismiss this theory. Former England captain Mike Atherton and veteran Stuart Broad have also played down the anomaly in Smith’s record.

“I would urge a word of caution over the expectation on Leach, though. People are saying left-arm spin gets Smith out but that is often in the subcontinent against really high-class operators like Rangana Herath when the ball is spitting like a cobra and turning big,” Atherton said.

Broad, on the other hand, says that averaging 34 on turning pitches is ‘bloody good’. “People have put forward an argument based on statistics that Steve Smith has a potential weakness against left-arm spin,” Broad wrote in his column for the Mail. “One thing I would say is that the numbers are skewed somewhat as he was up against Rangana Herath in his pomp in Sri Lanka three years ago and some high-quality bowlers in India over the years. Having witnessed how much the ball turned in Sri Lanka last year and knowing how pitches on the subcontinent can play from day three onwards, I would say 34 is a bloody good average.” 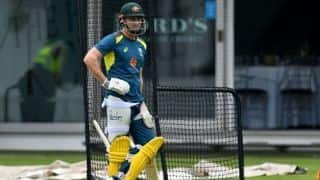