Catch all the live cricket scores and updates of Assam vs Bengal, Ranji Trophy 2015-16, Group A match, Day 1 at Guwahati.

Hello and welcome to CricketCountry’s coverage of Day One of the Round 8 Group A match of Ranji Trophy 2015-16 between Assam and Bengal at Guwahati. This is one of the most crucial games of this round, since the winner will go through to the quarter-finals. As things stand, either team will surely qualify. Whichever team gets 6 points with an outright win goes through immediately, though even 3 points for a first-innings lead will do. On the other hand, if either team gets even 1 point, they are still in with a chance, provided Karnataka and Vidarbha do not get more than 3 points each. COMPLETE COVERAGE: Ranji Trophy 2015-16

LIVE CRICKET SCORE: Bengal 189/4 | Overs 74 | BATTING: Shreevats Goswami 2(22), Laxmi Shukla 11(22): Shekhar Mandal who looked stable initially failed to convert his good start into a big knock. Assam’s Amit Verma dismissed him in the 66th over. He is the top-scorer for Bengal so far in the match with 87 runs in 193 balls. Krishna Das managed another sclap as he got the Bengal skipper out. OUT! Sayan Shekhar Mandal LBW Amit Verma 87(193) OUT! Manoj Tiwary c Amit Sinha b Krishna Das 12(43)

LIVE CRICKET SCORE: Bengal 162/2 | Overs 59 | BATTING: Sayan Shekhar Mandal 76(167), Manoj Tiwary 10(23): Gokul Sharma came in rescue for Assam as he managed to break the partnership of Sayan and Sudip. he removed the latter in the 53rd over by trapping him in leg before wicket. Sudip was out for a decent score of 65 runs from 151 balls, leaving Bengal at 148 for 2. Bengal skipper Manoj walks in next. OUT! Sudip Chatterjee LBW Gokul Sharma 65(151)

LIVE CRICKET SCORE: Bengal 77/1 | Overs 33 | BATTING: Sayan Shekhar Mandal 43(95), Sudip Chatterjee 25(90): While Shekhar has started to take on the bowlers, Sudip is taking the slow road. While Shekhar already has seven boundaries to his name, Sudip who is Bengal’s highest run-scorer so far in the tournament has just hit two of those.

LIVE CRICKET SCORE: Bengal 49/1 | Overs 24 | BATTING: Sayan Shekhar Mandal 29(62), Sudip Chatterjee 12(69): Sudip who has four centuries so far in the tournament will want to replicate one of thise innings in this match. However, both the batsmen do not seem in a hurry, the runs are not coming in regular intervals and that shows Assam’s dominance with the ball.

LIVE CRICKET SCORE: Bengal 37/1 | Overs 21 | BATTING: Sayan Shekhar Mandal 19(56), Sudip Chatterjee 10(57): Winning th etoss, Assam chose to field and their best bowler of the ongoing edition, Krishna Das, has already struck, removing the Bengal opener Abhimanyu Easwaran on the first delivery of the fifth over. Meanwhile the other bowlers who are into action are Arup Das and Gokul Sharma. OUT! Abhimanyu Easwaran b Krishna Das 8(13)

Match is delayed due to dampness in the pitch.

In fact, even if one of Assam or Bengal get 0 points they can STILL go through provided both Karnataka and Vidarbha suffer outright defeats. Assam have been the dark horses of the tournament this year. After shifting up from Group C last season, they have dominated this year as well. Players such as Abu Nechim Ahmed, Arun Karthick, Amit Verma, and the plethora of bowlers called ‘Das’ has worked in favour of Assam. Meanwhile for Bengal, the usual suspects like Manoj Tiwary and Laxmi Ratan Shukla have done expectedly well, but Pragyan Ojha has been one of their major players also. 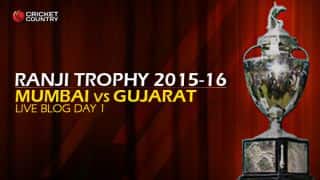