Catch the live cricket scores and updates from the game between Assam and Karnataka.

Hello and welcome to CricketCountry’s live coverage of Day 4 of the first Group A game of the 2015-16 Ranji Trophy between Assam and defending champions Karnataka at the Barsapara Cricket Stadium in Guwahati. At the end of Day two, Karnataka led Assam by 70 runs after bowling out the latter for 194 runs and that had allowed the home team to gain a lead of just seven runs before Karnataka openers gave a flying start to their side in their second innings. Meanwhile, Vinay Kumar and Shreyas Gopal bagged two wickets each that laid the platform for a strong Karnataka attack that denied Assam a healthy lead in the match.

Live cricket score Assam 201/4 | Overs 69| Batting: Tarjinder Singh 15(26),  Arun Karthick 78(157) | Karnataka have broken through and taken the illusive fourth wicket in the form of Gokul Sharma who was out leg before to Jagadeesha Suchith. Arun though is nearing his ton and will want to not miss out. Assam still need more 187 runs to win.  OUT! Gokul Sharma lbw J Suchith 55(154)

Live cricket score Assam 168/3 | Overs 56| Batting: Gokul Sharma 54(141) Arun Karthick 67(115) | Assam are looking good after the early stutter. Gokul Sharma has just brought up half-century and will want to convert it and take Assam closer to the target. Arun at the other end is nearing his ton and will be confident of taking the attack if needed ahead.

Ravikumar Samarth hit a brilliant century to help Karnataka post 394 for eight declared in their second innings and set a massive 388-run target for Assam on Day three of the Ranji Trophy Group A cricket tie here today. At stumps, Assam were reduced to 30 for one in their second innings with Pallavkumar Das batting on 21. Assam lost their opener Sibsankar Roy on the last delivery of the day. Suchith J, who had a disappointing first innings where he had managed just one wicket, struck early in the second innings removing Roy for a 30-ball eight. The inexperienced Assam will aim for a draw tomorrow, which is the last day of the match for a reason that it is unlikely for an for them to go pass the side that features the likes of Vinay Kumar, Karun Nair, CM Gautam and Robin Uthappa. Read: Ranji Trophy 2015-16, Stumps, Day 3: Assam need 354 runs to beat Karnataka 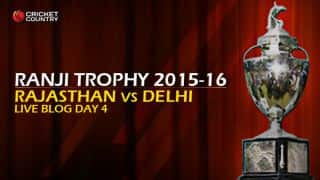