Catch all the live updates from Day 4 of the first test between Australia and South Africa here.

Hello and welcome to CricketCountry’s coverage of fourth day’s play of the first Test between Australia and South Africa at Perth on Sunday. It has been an interesting Test match so far, which has witnessed plenty of actions in three days. A result is on the cards as South Africa find themselves in a commendable position as they have a lead of 388 runs to thier name in the second innings. South Africa returned from the dead after getting bowled out in the first innings for 242. Their batting order collapsed as Australian bowlers did a commendable job with the ball. Quinton de Kock and Temba Bavuma played well adn helped their side to a decent total.  LIVE CRICKET SCORECARD: Australia vs South Africa, 1st Test at Perth

Australia in the first innings started of well with David Warner, Shaun Marsh firing with all guns but South African bowlers returned from the dead and chipped wickets in heap only to bring down Australia for 244. The visitors had a lead of 2 runs in the first innings, which was too low after the kind of start Warner got off to. Vernon Philander had four scalps to his name while Keshav Maharaj had an impressive debut with three big wickets to his name. It was some magnificent bowling from South African bowlers get the momentum back.

South Africa started their second innings well as Dean Elgar and JP Duminy both scored tons and steered their side to a commanding position. Duminy played with unmatched confidence and was equally backed by Elgar from the other end. Faf du Plessis also chipped in with some runs. Quinton de Kock and Philander are at the crease and on can expect some fireworks on Day 4.

Australian skipper Steve Smith was quoted in a report from ESPNCricinfo saying, “We let ourselves down yesterday, to only get two runs in front of their score wasn’t good enough. After the start we got with Davey [David Warner] and Shaun Marsh we got a great opportunity to post a big first innings score and we weren’t good enough. Credit to the South Africa bowlers at the same time, they came out yesterday morning and bowled really well, but the batters didn’t do the job.”

“It’s been pretty slow, the ball’s got soft very quickly. We’ve got to get the wickets in the morning, then if we an keep them out there, tie their two fast bowlers down and be a little more positive against the spin, there’s no reason why we can’t chase down a total on that. So far the balls that have misbehaved have been quite wide, so it’s still a pretty good wicket. It started to go pretty quick and the umpires handled it or whatever was going on out there. I think [reverse swing] has been a pretty big player during this game for both sides, very uncharacteristic of the WACA. But when the ball’s reversing it’s a tough one, you want to bowl spin but the way he holds the ball can soften that side and stop the ball reversing. You’ve got to use the quicks as long as you can and make the most of the ball while it’s going,” Smith further added.

Wickets will be the key for Australia as the game is now in South Africa’s favour. South Africa will look to get some quick runs and invite the visitors to chase, which is expected to be a difficult one. Expect another action filled day on Day 4. 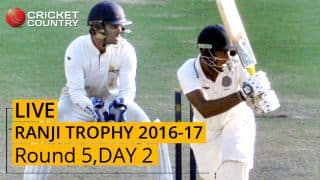