Catch all live cricket scores and updates from the fourth day of the second Test between Bangladesh and South Africa at Dhaka.

Hello and welcome to CricketCountry’s coverage of the fourth day of the second and final Test between Bangladesh and South Africa at Dhaka. This is Nikhil Popat and I will be bringing you the updates from the match. The first Test was marred by rain and more such is expected in the second Test. Bangladesh started the first day well after winning the toss and electing to bat first. They have put up a decent show so far and will wish to add as many runs possible. Rain washed out the entire Day Two and Day Three. Both teams will hope for play to get underway going forward. Will the home side manage to get the total towards 300? Or will South Africa wrap things up soon and dominate with an impressive batting performance? Catch all the updates here. Catch live cricket scores and ball-by-ball commentary of Bangladesh vs South Africa 2015, 2nd Test at Dhaka, Day 4 here

1240 IST: Day Four has been called off as well due to rain! Let’s hope we get some play on the final day of this Test!

Called off for the day. Again. This is a photo from just now but it could be from any of the past three days #BANvSA pic.twitter.com/B0JezSpPlz

1215 IST: The rain has relented a bit. Hopefully it stays that way for some time.

1145 IST: Just when you think things get closer, it is starting to rain!

An inspection is scheduled to 1:00 PM (Local) but it has started raining at Mirpur. #BANvSA pic.twitter.com/dPxaTjJeFW

1115 IST: The umpires are not quite happy with the state of the pitch. There will be another inspection at 1230 pm IST!

Umpires and match ref @ChrisBroad3 walked all over ground and look less than satisfied… pic.twitter.com/pzKwIo9Ckk

1110 IST: Well, the teams have arrived at the ground but it is still overcast. The umpires are out in the middle. The Bangladeshi players are playing football.

Teams have arrived at the ground; covers are off; but it’s overcast – it’s the hope that kills you! #BANvSA

1100 IST: As the fourth umpire comes down tothe ground for an inspection, LUNCH has been taken on Day Four. The sad state contines we have not had the first session of play for three days in a row now. Fingers crossed for some play soon.

1030 IST: All covers have been removed but the players are yet to leave from the hotels.

Covers are off. Let’s hope for the best. #BANvSA pic.twitter.com/p0B3l1e8Jr

0930 IST: By the grace of god, for the first time in two days, we have got to see the pitch. Let’s hope we start soon.

Seen this before, too. If it doesn’t rain again, we’ll have some play, sometime in many hours time. pic.twitter.com/ai0av0m4fi

The pitch in full view… pic.twitter.com/wfRNuxQMZg

0915 IST: Thankfully, the rain has stopped. But there is some work for the groundstaff to be done. Let’s hope we get some play before lunch on Day Four.

0815 IST: The saga continues folks! The rain continues to hamper this Test, it is bucketing down in Dhaka.

Day 4 #BANvSA rain and more rain. Nothing else to report. pic.twitter.com/qort1gdfVF

Both the teams will be hoping that the rain allows some play. Bangladesh will want to get back on the field, get a score under their belt and with so much rain coming, the pitch might not quite behave unexpectedly and will wish to catch South Africa off guard. Let’s see what is in store for us. 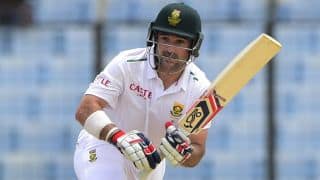