Catch live scores and updates from the second day's play between Bangladesh and Zimbabwe here.

Zimbabwe 5/0 | Overs 2
Regis Chakabva 0(0), Vusi Sibanda 5(12)
Stumps, Day 2. It’s the end of day 2 of the first Test match here and Bangladesh, who started the day took the lead, but not a big one as they were bowled out and Zimbabwe move on to the second innings and trail by a mere 9 runs.
Bangladesh 254 I Overs 98
Jubair Hossain 7(27)
Thats it!!!!!! Final wicket of the innings falls in the form of Al-Amin Hossain who is bowled for just nine off 15 by Panyangara. Bangladesh have a lead of 14 runs and would now be interesting to see how Zimbabwe fair with the bat again after a decent performance with the ball.
Al-Amin Hossain 9(15) b Panyangara
Bangladesh 244/9 I Overs 92
Al-Amin Hossain 0, Jubair Hossain 0(9)
OUT!!!!!!!!! Taijul Islam is bowled for 19 off Panyangara. It’s now almost the dead end for Bangladesh as they have their last pair of batsmen on the crease with a lead of four. How much more can they earn?
Taijul Islam 19(46) b Panyangara
Bangladesh 234/8 I Overs 92
Taijul Islam 15(43), Jubair Hossain 0(9)
Just six runs behind now and it seems like it should be a comfortable position to take the lead. however, the question is how long and how far could the tail-enders steer the innings and how comfortable would be the lead they manage to get?
Bangladesh 226/8 I Overs 88
Taijul Islam 9(25), Jubair Hossain 0(3)
OUT!!!!!!!!! It’s all going down for Bangladesh as they their eighth wicket. Shahadat Hossain has to depart for a duck and that too in the fashion of a run out. It would really be tough for them from here on to take a lead if the tailenders fail to impressas they still trail by 14.
Shahadat Hossain 0(3) run out
Bangladesh 226/7 I Overs 86
Taijul Islam 9(19), Shahadat Hossain 0(0)
OUT!!!!!!!!! It’s Rahim now who has to depart after a good knock of 64. None of the Bangladesh batsmen seem to go beyond the 60’s. Short ball, tries to pull, but hands Ervine a simple catch at the sqyare leg. bangladesh need to hold the fall if they wish to go past the Zimbabwean total by the end of the day.
Mushfiqur Rahim 64(126) c Ervine b Panyangara
Bangladesh 210/6 I Overs 79
Mushfiqur Rahim 57(101), Taijul Islam 0(4)
OUT!!!!!!!!! Hom depart for a cheap 14 while Rahim too reaches his half-century and is batting brilliantly as looks forward to make sure Bangladesh have a comfortable lead at the end of the day.
Shuvagata Hom 14(31) c Chigumbura b Kamungozi
Bangladesh 179/5 I Overs 70
Mushfiqur Rahim 39(73), Shuvagata Hom 1(7)
OUT!!!!!!!!! It’s Mahmudullah who is trapped in front by Sikandar Raza. The ball pitches on the off stump and turns in to hit the pad as hawk-eye shows it hits the leg-stump. Good knock, but failed to convert it to a big total. Fifth down for Bangladesh as Shuvagata Hom comes in.
Mahmudullah 63 (160) lbw b Raza
Bangladesh 175/4 I Overs 65
Mahmudullah 62(149), Mushfiqur Rahim 37(61)
Mahamudullah continues his play in the similar fashion while Mushfiqur rahim incesh closer to his half-century, cureently batting on 37 of 61 balls. Bowling figure for most successive bowler so far: T Panyangara 13-3-41-2.
Bangladesh 154/4 I Overs 60
Mahmudullah 55(133), Mushfiqur Rahim 23(47)
Sensible cricket again from Mahmudullah as he continues to play in a composed manner and not looking to be ambitious or play big shots. Rahim too seems to play sensibly while the bowlers are bowling hard to restrict them to a low total.
Bangladesh 147/4 I Overs 55
Mahmudullah 50 (114), Mushfiqur Rahim 21(36)
It’s fifty for Mahamudullah. A good innings so far in a pressure situation having seen two of his partners dismissed for cheap. However, he did not panic, maintained a cool and calm head and steered his and his teams innings forward. Now, he must make sure to convert it into a big one from hereon and do not give away his wicket at any cost, whereas Zimbabwe bowlers would be hungry for his wicket.
Bangladesh 130/4 I Overs 50
Mahmudullah 42 (101), Mushfiqur Rahim 12(19)
After an unimpressive start to the post-lunch session and losing star all-rounder Shakib for cheap, it’s high time for batsmen Mahmudullah and Mushfiqur Rahim to make sure they sterr the innings past the Zimbabwean total without losing further wickets. Mahmudullah, on the other hand is nearing his fifty and is currently on 42 from 101 deliveries.
Bangladesh 114/4 I Overs 45
Mahmudullah 38 (90), Mushfiqur Rahim 0(0)
OUT!!!!!!! Shakib departs in a similar fashion as that of Mominul Haque in the form of a run out. Mahmudullah plays it to mid-off, Shakib was looking for a single but the striker was not interested and dived to run the all-rounder out who was surely out of the crease and failed to get back, even with the dive. Fourth one down for Bangladesh. Not an ideal start to the post-lunch session.
Shakib Al Hasan 5(8) run out
Bangladesh 92/3 I Overs 41
Mahmudullah 25 (74), Shakib 0(0)
OUT!!!!!!!!! Mominul has bee run out unfortunately. Tapped a simple ball towards cover and quickly went on to scramble for a single, however Sikandar Raza gets a direct hit at the non-strikers stump to get rid of the half-centurion after failing to drag his bat back to the crease on time.
Mominul Haque 53(112) run out

Bangladesh 92/2 | Overs 40
Mahmudullah 25(71), Mominul Haque 53(109)
It’s fifty for Mominul Haque. A good innings in a critical situation and early hours of the day when there is so much for the bowlers on the pitch and eventually got a breakthrough early during the day. However, Mominul made sure that he didn’t panic and play his natural game instead of being ambitious thus leading to this knock.
Bangladesh 74/2 | Overs 35
Mahmudullah 20(58), Mominul Haque 40(92)
Another good five overs from Bangladesh’s point of view as both Mahmudullah and Mominul Haque continue to play well without causing any trouble to the bowlers and the whole Bangladesh team. Mominul however is nearing his half-century with currently being on 40 off 92 deliveries.
Bangladesh 60/2 | Overs 30
Mahmudullah 18(51), Mominul Haque 28(69)
The same formula applied by the two Bangladesh batsmen as they continue to play sensibly. However, there must be some credit given to the bowlers, especially Tendai Chatara who has bowled brilliantly so far, bowling six maiden in his nine overs.
Bangladesh 45/2 | Overs 25
Mahmudullah 11(29), Mominul Haque 20(61)
Both the batsmen seem to be on a mission to bat it out the whole session as they keep their composure and play sensibly, continuing with their mantra of not to go for the big shots and instead defend the ball, deal in ones or twos and ocassionlay hit boundaries only when there is a loose delivery. 16 runs added in the last five overs.
Bangladesh 39/2 | Overs 20
Mahmudullah 10(13), Mominul Haque 15(47)
Having lost an ealry wicket at the start of the second day, Bangladesh are looking to maintain a steady and composed gameplay without going for any undue risks and play sensible cricket. Just 10 runs added in the next five overs.
Bangladesh 29/2 I Overs 15
Mominul 15(29), Mahmudullah 0(1)
Poor shot from Shamsur. Tried to check his shot at the last moment and an uppish drive sends the ball towards wide mid-off where Chigumbura completes a comfortable catch.
OUT! S Rahman c Chigumbura b Panyangara 8(50)

After bundling Zimbabwe out for 240, Bangladesh resume Day Two on 27 for one still trailing by 213 runs in the first Test. I am Ayush Gupta and I will be bringing the live updates of the match. It was a disciplined performance from the Bangladesh spinners led by Shakib Al Hasan who bagged six wickets. Shakib, who made his Test comeback after serving a three-month ban for poor discipline, led a three-pronged spin attack that strangled Zimbabwe on the slow wicket

It was an ordinary batting performance from Zimbabwe after they won the toss and elected to bat. Opener Sikandar Raza was the only batsman to go past half-century. Rest of the batsmen failed to capitalise on the starts.

Bangladesh introduced spin in the eighth over and were rewarded almost immediately as Shakib had Masakadza caught by Jubair at long off for 13. Zimbabwe went in at lunch on a respectable 77 for two but Jubair, who at 19 became the first specialist leg-spinner to play Test cricket for Bangladesh, dismissed Taylor and Raza in quick succession after the break. Shakib removed Panyangara (eight) to complete his 12th five-wicket haul and then added debutant Tafadzwa Kamungozi to his tally to wrap up the Zimbabwe innings. 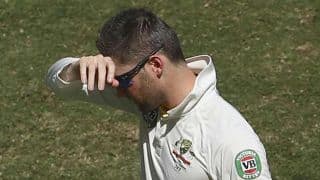