Welcome to CricketCountry’s live coverage of Day 2 of the Ranji Trophy 2015-16, Group B match between Bengal and Odisha in Kolkata.

Hello and welcome to CricketCountry’s live coverage of Day 2 of the Ranji Trophy 2015-16, Group B match between Bengal and Odisha at the Bengal Cricket Academy Ground in Kolkata. Bengal who are in the fifth spot are looking for a desperate win here and rise above the table, while Odisha, who are in the seventh spot too are battling for the same. Going by the Day 1 performance, both the team had a dreadful performanc with the bat as they were budled for just above 100. Although Bengal had a 58 run lead over the visitors in the second innings at stumps, they would look to come up with a stellar performance with the bat as they still have three days of play left. Ranji Trophy 2015-16, complete coverage

LIVE CRICKET SCORE: Odisha 37, BATTING: Jayanta Behera 7 (22) — THAT’S IT!!!! Bengal win by 133 runs as Odisha have been shot out for mere 37, the second lowest total for Odisha against any team in the tournament’s history. Bengal earn the all crucial six points, however the talking point of the match would definitely be about the quality of the wicket that saw the game wrapped up in just two days.

LIVE CRICKET SCORE: Odisha 22/7, BATTING: Suryakant Pradhan 1 (4), Jayanta Behera 1 (9) — What on earth is this! With just 22 runs on the board, Odisha are seven wickets down. This could either be exceptionally good bowling from Bengal, or horrible behaviour by the pitch is most likely.

LIVE CRICKET SCORE: Odisha 3/1, BATTING: Natraj Behera 2 (7), Arabind Singh 0 (4) — BOWLED OUT!!!! Bengal have been bowled ouyt for a lower total than the first innings total as they fisnish second innings on 135, while Odisha need 171 runs to win, as they losing the opening wicket in the form of Ranjit Singh for a mere single.

LIVE CRICKET SCORE: Bengal 108/5, BATTING: Manoj Tiwary 19 (47), Pramod Chandila 0 (16) — Three more down for Bengal as they have a lead of 143 runs, with Dhiraj Singh and Basant Mohanty claiming a couple each so far.

LIVE CRICKET SCORE: Bengal 69/2, BATTING: Sudip Chatterjee 17 (60), Manoj Tiwary 5 (12) — GONE!!!! A couple of wickets are down for Bengal early on as they lose Eswaran and Sayan Shekhar Mandal. The pitch still seems to be behaving weird.

Opener Abhimanyu Easwaran scored a classy 88 while 20 wickets fell in the opening day between Bengal and Odisha. Easwaranwas the top scorer as Bengal were bowled out for a meagre score of 142 as the wicket mostly looked and seemed to be under-prepared. The pitch condition was evident when Odisha too were bowled out for 107 with off-spinner Aamir Gani claming the most of 6 wickets for 34. He was also supported by the likes of  Pragyan Ojha (2/25) and debutant Anurag Tiwary (2/26), reported PTI. 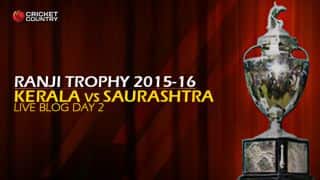