Catch all Day Three updates of the Ranji Trophy 2015-16 match between Bengal and Rajasthan here.

Hello and welcome to CricketCountry’s live coverage of Day 3 of the Group A game of the 2015-16 Ranji Trophy between Bengal and Rajasthan, live from Eden Gardens, Kolkata. Day Two of the match again witnessed very little play owing to persistent rainfall and play ended with Rajasthan stalled at 140 for five in 59.4 overs. Ideally two days should have seen there being bowled about 180 overs but less than 1/3rd of that has been achieved. It will be surprising if the match ends with a result. READ: Ranji Trophy 2015-16, full coverage here

Nevertheless, teams will play for the first innings lead which will give them three points. At present, Bengal seems better poised to claim those points given that Rajasthan has half their batsmen in the hut without making a significant impact. Apart from opener Vineet Saxena batting steadily at 44 and Ashok Menaria scored 40 before being dismissed. The remainder of the batting line up didn’t fare well however.

Pragyan Ojha was lethal with the ball taking three wickets in his 22 overs while conceding a mere 22 runs. His spell even included eight maidens as the Rajasthan batsmen looked to play him out with added caution. Ashoke Dinda and Pratap Singh took one wicket each. Bengal will hope to make further breakthroughs on Day Three to get the Rajasthan innings wrapped quickly so that they have a smaller first innings total to surpass.

Live cricket scores Bengal 136/3 | Rajasthan 198  | Overs 54| Batting: A R Eswaran  53(156), Manoj Tiwary 51(107): Manoj Tiwary and AR Eswaran reach their fifties. Bengal are trailing by 62 runs now. This partnership is now worth 91 runs and has helped Bengal a lot after they lost three wickets on just 48 runs. Manoj Tiwary has hit six fours so far. If Rajasthan wants to win this match they have to break this partnership at any cost. Rajasthan bowlers are lacking that killer instinct, they bowled well in the first 25 overs but from then on they are looking down and out. They should had not gone lose after the fall of the top order. It was more about Rajasthan bowlers getting lose than Bengal batters batting well as far as the last 25 overs are concerned.

Live cricket scores Bengal 91/3 | Rajasthan 198  | Overs 41.3| Batting: A R Eswaran  37(125), Manoj Tiwary 27(67): AR Eswaran and Manoj Tiwary’s partnership has reached 43 runs. After the loss of Sudip Chatterjee things were looking difficult but these two batters have helped steady the ship. Eswaran has hit four and Tiwary three boudaries so far. They are looking good and are not making any mistakes. Rajasthan bowlers need to break this partnership soon.

Live cricket scores Bengal 65/3 | Rajasthan 198  | Overs 31.4| Batting: A R Eswaran  31(103), Manoj Tiwary 8(29): AR Eswaran and Manoj Tiwary are doing rebuilding after the collapse of three early wickets. They are batting patiently at strike rates of 30.10 and 26.67 respectively. Manoj Tiwary being a more complete batsman among the two has greater responsibility to take Bengal to a respectable total. Aamar Gini and Wriddhiman Saha are next to come if any wicket falls.

Live cricket scores Bengal 51/3 | Rajasthan 198  | Overs 25.1| Batting: A R Eswaran  28(85), Manoj Tiwary 1(9): Bengal batters are taking their time to get settled but just when they try to change their batting gear they are unable to execute the right shot for every delivery. They lost the vital wicket of Sudip Chatterjee for just one run. Match is getting interesting. OUT! Shreevats Goswami lbw AV Choudhary 7(24), Sudip Chatterjee b Chahar 1(11)

Live cricket scores Bengal 2/0 | Rajasthan 198  | Overs 4.1| Batting: A R Eswaran  0(16), Naved Ahmad 1(9): Bengal have started to bat in their first innings, they have to score quickly if they wish to force a result in this match. But Bengal should make sure that they don’t lose early wickets. They should play out the first 15-20 overs  before they start playing scoring shots.

Live cricket scores Rajasthan 198  | Overs 95.5| Batting:  Vineet Saxena 66(271):  Rajasthan are bowled out for 198. Opener Vineet Saxena remained unbeaten on 66 having faced 271 balls. He hit six fours in his knock and had a strike rate of 24.35. It is rare occurrence in Test cricket when the opener carries his bat through the innings.  OUT! AV Choudhary b Aamir Gani 0(4), NB Singh b Ashok Dinda 8(17)

Live cricket scores Rajasthan 180/8  | Overs 86| Batting:  Vineet Saxena 56(232), AV Choudhary 0(1): Rajasthan since morning today have lost four wickets for just 40 runs. Vineet Saxena has completed his half century. AV Choudhary is the new batsman, he is yet to get off the mark. Pragyan Ojha has impressed with his bowling, his figures are 4-46. This match is heading towards a draw. Rajasthan needed to bat faster if they wanted to force a result. As of now their primary objective should be to get to 200. OUT! DH Yagnik lbw Pragyan ojha 0(4), DL Chadar c Sudip Chatterjee b Veerpratap Singh 9(19), AB Singh c Sudip Chatterjee b Aamir Gani 2(23) 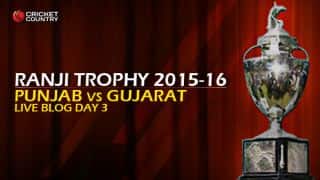