Welcome to CricketCountry's live cricket blog and updates from the second day of the ongoing Ranji Trophy 2015-16 match.

Hello and welcome to CricketCountry’s live coverage of the Ranji Trophy 2015-16 game betweenDelhi and Vidarbha at the Feroz Shah Kotla Stadium in Delhi. Delhi are presently the leaders in the Group A of the tornament as they sit comfortably atop the table with 10 points they gathered from the five games they have played so far, that includes three draws and a couple of wins, and they would be eager to maintain their stay at the top. Maharashtra, on the other hand, have had a shaky season so far, playing four games, drawing three and losing one as they are placed sixth in the table with nine points and would be desperate to earn their first victory of the season. Also Read: Live Cricket Score, Delhi vs Maharashtra, Ranji Trophy 2015-16, Group A match, Day 1 at Delhi: At stumps, Delhi lead by 77 runs

LIVE CRICKET SCORE Delhi 30/1 | Target 27 | 14 overs | BATTING: Dhruv Shorey 11(36), Rishabh Pant 4(5): Delhi thrashed Maharashtra by nine wickets in Round 6 of the ongoing Ranji Trophy 2015-16 inside two days. Earlier in the day, Delhi bowled out their opponents for 176 and had a target of 27 with more than two days in hand. Maharashtra’s Akshay Darekar bagged a consolation wicket of Unmukt Chand before Rishabh joined Dhruv in the middle to finish the job for Delhi. Manan Sharma once again was impressive with four wickets to his name and other Maharashtra wickets were shred among Pradeep Sangwan, Milind, Pulkit Narang and Pawan Negi. OUT! Unmukt Chand c Rahul Tripathi b Akshay Darekar 12(43)

LIVE CRICKET SCORE Maharashtra 147/7, 80 | Delhi 230 | 47 overs | BATTING: Rohit Motwani 10(19): From here, the visitors trail Delhi by three runs with just three wickets to spare. Rahul Tripathi was out on last delivery of the 47th over. Delhi’s Manan Sharma and Pawan Negi shared five wickets between each other of the six dismissals made so far, while Sangram Atitkar top-scored for Maharashtra with struggling 30 from 103 balls before getting out in the 38th over. The last batsman to get out was Kedar Jhadav. He scored a five-ball seven before getting caught by Dhruv Shorey on the second delivery of the 41st over. OUT! Kedar Jadhav c Dhruv Shorey b Manan Sharma 7(5) OUT! Rahul Tripathi LBW Manan Sharma 18(30)

LIVE CRICKET SCORE Maharashtra 66/2, 80 | Delhi 230 | 19 overs | BATTING: Sangram Atitkar 11(38), Chirag Khurana 5(13): From here, the visitors trail by 84 runs with eight wickets in hand. After bowling out Delhi by stumps of Day 1, Maharashtra once again had a poor start to their innings. Their first wicket fell in the seventh over when Swapnil Gugale was dimissed by Pradeep Sangwan. His wicket was followed by Harshad Khadiwale’s dismissal. He scored 26 from 38 balls before giving a catch to Delhi’s skipper Gautam Gambhir off Pawan Negi’s bowling. OUT! Swapnil Gugale b Pradeep Sangwan 18(27) OUT! Harshad Khadiwale c Gautam Gambhir b Pawan Negi 26(38)

LIVE CRICKET SCORE Delhi 230 in Overs 68: The touring party was shot out for  80 and Delhi have build up a strong first-innings lead here. Maharashtra’s poor performance with the bat on the first day means they will be playing the game of catching up for most of the time. The Feroze Shah Kotla wicket isn’t known for supporting the bowlers but it is refreshing to see the bowlers making merry. Delhi’s lead is of 150 runs and it should be enough for them to create pressure on Maharashtra.

In the previous game, Delhi suffered batting collapses as 18 wickets fell on the final day of their Ranji Trophy Group A match against Odisha, which ended in a draw. This game too saw wickets tumbling, but Delhi were not at the receiving end this time around. Delhi had a gala time on Day 1. First their bowlers made merry by dismissing Maharashtra for a paltry score of 80. Then their batsmen recovered an early hiccup by reaching to 4 for 157 at stumps. Dhruv Shorey and Nitish Rana posted half-centuries. Day 2 promises more action, as the first day saw 14 wickets going down.

TOSS: Maharashtra elected to bat after winning the toss. 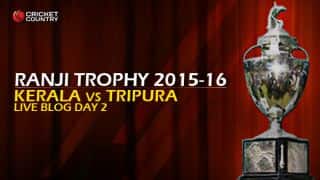 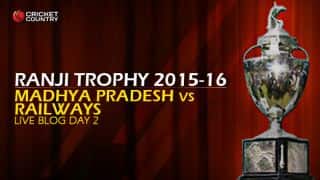